On Tuesday 29 November, Southern Airlines Beech B200 King Air VH-AMF was noted doing the weekly Fly-in Fly-out (FIFO) charter flight up to Moranbah Airport. It flew up from Latrobe Valley and Bourke to Moranbah Airport before then heading back to Bourke and Latrobe Valley.
And DeGunst Transport P/L Textron (Cessna) 208 Caravan VH-NPZ completed its weekly FIFO run from Bundaberg Airport to Nebo Aerodrome and back.
Meanwhile, also on Tuesday 29 November, the Queensland Government Airwing (State of Queensland) Raytheon B300 Super King Air VH-SGQ visited Rockhampton Airport from Mount Isa.
Machjet (Machjet International) Hawker Beechcraft B200 King Air VH-ZSY flew down from Townsville to Rockhampton Airport but due to weather it diverted to Mackay Airport.  Later, it was able to land at Rockhampton Airport from Mackay Airport before it then departed back to Townsville.
Brisbane-based Avcair Cessna 425 Conquest 1 VH-BSM visited Theodore Aerodrome from Archerfield.
And Edwards Coaches Cessna 441 VH-TAZ flew up from Armidale, Bankstown and Wangaratta to Hervey Bay (Fraser Coast) Airport and then Bundaberg Airport before then flying North to Cairns.
UPDATE!  On Wednesday 30 November, VH-TAZ passed through Gladstone Airport while flying down from Cairns to Armidale.
Finally, also on Tuesday 29 November, MacKellar Mining Equipment Pty Ltd (Revesco Aviation) Cessna 680 Citation Sovereign bizjet VH-MMC was noted visiting the Labona Station Airstrip within Adani Australia's (Bravus Mining & Resources) Carmichael Coal Mine site. It looked to arrive from and then later depart back to its Sunshine Coast base via Emerald Airport.
Posted by Damian F at 9:48 PM 0 comments

On Monday 28 November, a pair of Royal Australian Air Force (RAAF) Pilatus PC-21 Forward Air Control Aircraft from No. 4 Squadron were noted arriving into Rockhampton Airport after flying up from their 'home' at RAAF Base Williamtown via the Shoalwater Bay Training Area (SWBTA). 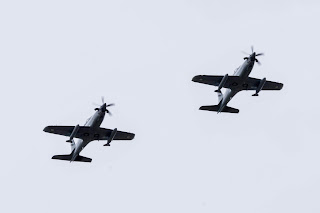 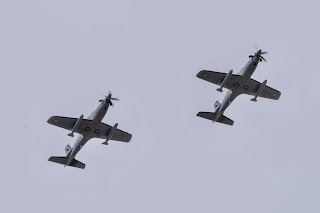 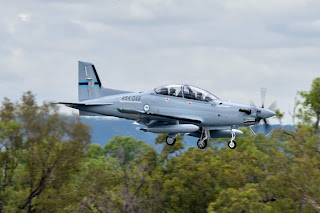 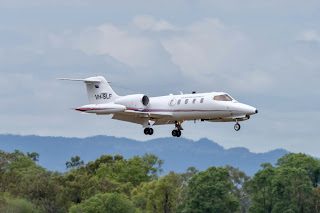 While currently deployed LearJet 35A's VH-SLD and VH-LFA completed a sortie in support of the Exercise, flying out of and back to Rockhampton Airport as "Fencer". 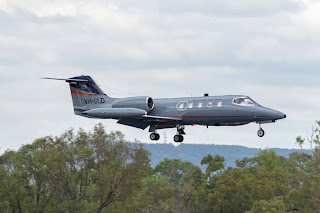 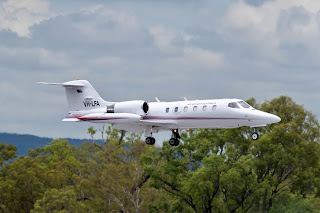 Finally, also on Monday 28 November, heard up in the Shoalwater Bay Training Area (SWBTA) were three flights of RAAF Lockheed Martin F-35A Lightning II fighter aircraft as "Hunter", "Hawkeye" and "Hipshot", which all completed sorties out of and back to RAAF Base Amberley.
RAAF Airbus A330-200 / KC-30A Multi Role Tanker Transport (MRTT) A39-001 as "Dragon 14" was also noted in the area providing air-to-air refuelling support to the F-35A's.
And the deployed Royal Australian Air Force (RAAF) Search and Rescue (CHC Helicopters Australia / Lloyd Helicopters) Agusta AW139 helicopter VH-SYJ "Choppa 22" again looked to complete some locally based airwork, flying out of and back to Rockhampton Airport.
Sincere thanks to local plane spotter Scott H for taking the time to capture and send through these great photos!
All photos taken by Scott Harris  ©
Posted by Damian F at 9:04 PM 0 comments 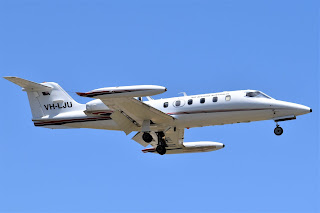 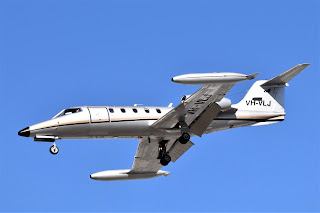 Late on Friday 25 November, Hevilift Australia (Fixed Wing Division) ATR 72-500 VH-FVI was noted arriving into Rockhampton Airport from Horn Island as HT710.  It had earlier flown up to there from Townsville.
Then on Saturday 26 November, VH-FVI departed Rockhampton Airport and returned to Horn Island but as HT718.  It then flew down to Brisbane as HT719.
This appears to be a school charter, ferrying students home for the school holidays.

Meanwhile, also on Saturday 26 November, Metro Holdings Australia / Air Link (Dubbo) Piper PA-31-350 VH-IGK flew up from Archerfield to land at the Whitsunday Airport at Shute Harbour.
UPDATE!  On Sunday 27 November, VH-IGK departed the Whitsunday Airport at Shute Harbour and returned to Archerfield.
It is believed it ferried up engineers to start preparing Cessna 510 Citation Mustang VH-FNI which has been acquired by Air Link and which has remained in a hangar at the Whitsunday Airport at Shute Harbour since its 'incident' in April this year.
Elsewhere in the region, Brisbane-based Avcair Cessna 425 Conquest 1 VH-BSM arrived into Longreach Airport from its Archerfield base.  It has also visited Charleville and Miles Airports over the last week.
UPDATE!  On Sunday 27 November, VH-BSM departed Longreach Airport and returned to Archerfield.
Aero Logistics Cessna 441 VH-YFD was again noted completing aerial survey work out of Emerald Airport.
Aerometrex Vulcanair (Partenavia) VH-EPX completed a local aerial survey flight out of and back to Rockhampton Airport.
Liddle's Air Service Partenavia P.68C VH-PNW completed an aerial survey flight out of Hervey Bay (Fraser Coast) Airport up to Bundaberg Airport.  It then flew down to Caloundra via more survey work.
Flight Training Adelaide (FTA) / Qantas Group Pilot Academy Diamond DA-40 Star training aircraft VH-YTU and VH-YTW both flew up from Toowoomba-Wellcamp to land at Hervey Bay (Fraser Coast) Airport.  They both then departed to Wondai and then back to Wellcamp.
Australian Flight Operations (Canberra) Pilatus PC-12/47E VH-YQJ was noted calling into Bundaberg Airport after it flew up from the Shellharbour Airport at Woolongong.  It also has been known to complete 'anonymous' aerial survey flights.
While also calling into Bundaberg Airport was Airflite / Commonwealth of Australia (Cadets Branch - Air Force) Diamond DA 40 NG Star VH-UEL as "Astra 221" flying from and back to RAAF Base Amberley.
Brisbane-based Hewitt Cattle Australia P/L SOCATA TBM 700 VH-PGA made an early departure from Moura Aerodrome to Archerfield before then continuing to Narrandera, Griffith and Mudgee.
ZephAir Australia Piper PA-34-220T Seneca VH-YSI once again looked to arrive into Proserpine (Whitsunday Coast) Airport from Townsville. It then completed a local flight before returning to its Townsville base.
Cessna 208B Supervan 900 Skydiving Aircraft VH-XLF arrived into Roma Airport from Wilton before then departing to the Lakeside Airpark where it seems to have commenced 'operations'.
And Townsville-based NQ Heli-Worx (Meridan Helicopters) Aerospatiale AS350 B2 Squirrel helicopter VH-MHE as "Energy 401" took off from Parkhurst (Rockhampton) and completed powerline inspections around the Rockhampton area.
Photo taken by John Lee  ©
Posted by Damian F at 8:57 PM 0 comments

On Friday 25 November, and 'bookending' the week after also visiting at the start of the week, new MT Air Charters / Pilatus Australia Pilatus PC-24 Super Versatile Jet VH-PIL was again noted visiting Gladstone Airport.
On this occasion, it looked to fly up from Adelaide via Newcastle (Williamtown) and then depart to Sydney and then back to Adelaide.
While Bowenville (near Toowoomba) based Cessna 525 CitationJet CJ1+ bizjet VH-JSZ visited Charters Towers Aerodrome from Archerfield.
And LifeFlight (Aeromed) Canadair CL-600-2B16 Challenger 604 bizjet VH-OFA "Ambulance 614" called into Proserpine (Whitsunday Coast) Airport from Townsville. It then departed to Brisbane before later flying back to Townsville via Mount Isa.

Meanwhile, also on Friday 25 November, Hinterland Aviation Beech B200 King Air VH-HLJ arrived into Rockhampton Airport from Cairns and Townsville and then departed to Brisbane.  Later it returned direct to Cairns.

And Aerometrex Vulcanair (Partenavia) VH-EPX was back in the region and arrived into Rockhampton Airport from Roma Airport via some survey work East of Roma.  It looks to have planned to complete an aerial survey flight out and back to Rockhampton Airport to around Blackwater on Saturday.

Finally, also on Friday 25 November, and for the first time this week, Qantas Freight (Pionair Australia operated) British Aerospace BAe 146-200QT VH-SFV was back on the Rockhampton and Mackay Airports freight run from Brisbane.
During the remainder of the week, a Pel-Air Aviation Pty Ltd (Pel-Air) SAAB 340A freighter has been noted back on the run.
Photo taken by Brodie Lawson  ©
Posted by Damian F at 9:05 PM 0 comments


It appears to have flown up from and later returned back to RAAF Base Williamtown.

Meanwhile, also on Friday 25 November, Royal Australian Air Force (RAAF) Alenia C-27J Spartan transport aircraft A34-005 as "Wallaby 72" flew up from RAAF Base Amberley to complete airwork at Bundaberg Airport before it then returned to Amberley.

And after dark on Thursday 24 November, fellow RAAF C-27J Spartan A34-006 as "Wallaby 74" was noted completing airwork around Miles Airport.

Finally, also on Friday 25 November, some of the deployed RAAF and support aircraft departed from Rockhampton Airport following their involvement over the previous couple of days in the Royal Australian Air Force (RAAF) Exercise Rogue Ambush.

Two of the four Air Affairs (Australia) Learjet 35A bizjets departed Rockhampton Airport to different parts of the country - VH-SLE as "Ajax 42" departed to Darwin, while VH-LRX as "Ajax 19" departed to HMAS Albatross at Nowra.

A Few Bizjets and a Couple of Lighties Around CQ Airports!

Mitchell Water Cessna 525 Citation M2 bizjet VH-WMY flew into the Whitsunday Airport at Shute Harbour from Melbourne (Moorabbin), Parafield (Adelaide) and Broken Hill before then returning to Parafield and then to Melbourne (Essendon).
And LifeFlight (Aeromed) Canadair CL-600-2B16 Challenger 604 bizjet VH-OFA "Ambulance 614"  landed at Hervey Bay (Fraser Coast) Airport from Townsville, Cairns and Brisbane before then departing to Mackay Airport and then back to Townsville.
Meanwhile, also on Thursday 24 November, Brescon (Toowoomba) Beech B200 King Air VH-XDW landed at Emerald Airport from Toowoomba-Wellcamp before then departing to Kowanyama.
Fellow Brescon (Toowoomba) Beech B200 King Air VH-WXN flew from Toowoomba-Wellcamp to Roma Airport and back before then heading up to Rockhampton Airport and then back to Wellcamp via Cunnamulla. 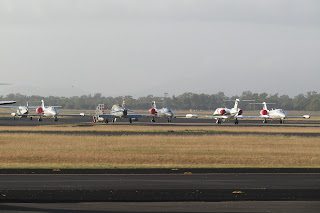 Later, three of the four LearJets took to the air with VH-SLE and VH-LFA flying together as "Fencer" and VH-SLD flying out of and back to Rockhampton Airport as "Fishbed 41". 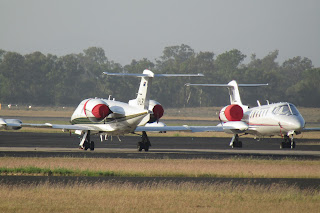 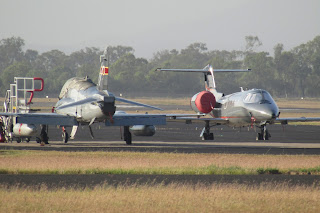 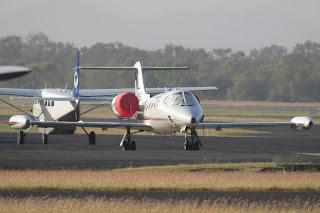 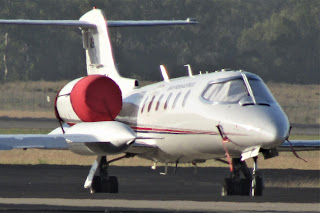 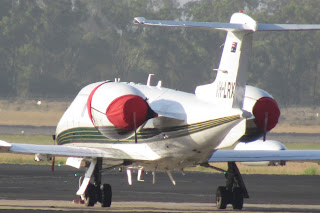 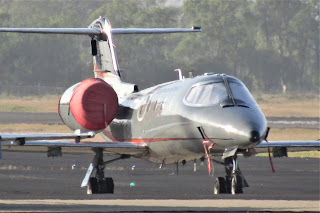 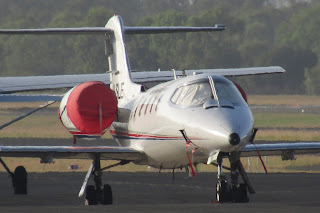 It seems that VH-LRX did not fly.

While RAAF British Aerospace (BAe) Hawk 127 jet training aircraft A27-07 completed another flight out of and back to Rockhampton Airport as "Tiger 11". 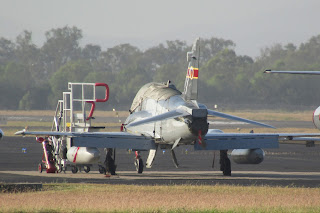 It appeared to head up to the Shoalwater Bay Training Area (SWBTA) where three flights of RAAF Lockheed Martin F-35A Lightning II fighter aircraft as "Hunter", "Hawkeye" and "Hipshot" operated while completing sorties out of and back to RAAF Base Amberley. 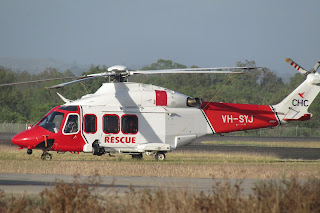 Sincere thanks to local plane spotter Trevor H for taking the time to capture and send through these great photos!
All photos taken by Trevor Hardsman  ©
Posted by Damian F at 9:56 PM 0 comments

Austrek Aviation Cessna 310R VH-DZU visited Rockhampton Airport from its Toowoomba base.
The Queensland Government Airwing (State of Queensland) Raytheon B300 Super King Air VH-SGQ visited Rockhampton Airport from Mount Isa.
Victoria-based Tasfast Air Freight / Southern Airlines Aero Commander 690-A VH-CLT flew up from Melbourne (Moorabbin) and Wangaratta to Emerald Airport.  It then departed to Dubbo and back to Moorabbin.
Brisbane-based Hewitt Cattle Australia P/L SOCATA TBM 700 VH-PGA flew up from Moura Aerodrome to Emerald Airport.  It then flew to Alpha Aerodrome and then back to the South East where it possibly eventually landed at Rolleston Aerodrome.
While Liddle's Air Service Partenavia P.68C VH-PNW completed of aerial survey flights out of and back to Hervey Bay (Fraser Coast) Airport.  It had arrived there over the weekend.
And Link Airways SAAB 340B VH-VEC visited Rockhampton Airport from Brisbane.  While Link Airways Metro 23 VH-VET flew out of Longreach and Boulia Airports from Brisbane before then returning to the capital over the same route.
Photos taken by Lloyd Fox  ©
Posted by Damian F at 8:41 PM 0 comments