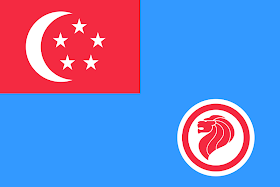 Ben O has recently been keeping an eye on the Exercise Wallaby happenings at Rockhampton Airport and was lucky enough to catch two Republic of Singapore Air Force (RSAF) Eurocopter AS332M Super Puma helicopters depart on one of their final sorties for the exercise on Sunday 20 November. 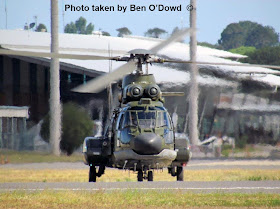 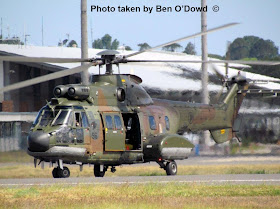 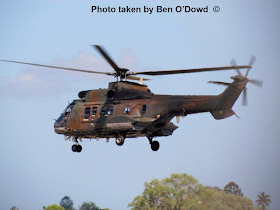 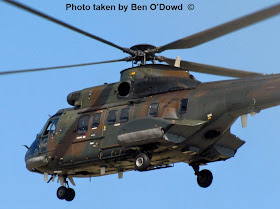 Serials 292 and 296 are pictured above departing for the Shoalwater Bay Training Area.

Meanwhile, the packing up had begun, with Exercise Wallaby 2011 coming to a close for the Singapore Defence Forces. On Monday 21 November Ben O noted that the four RSAF Boeing AH-64D Apache helicopters have had their rotars removed, and have been taped up in preparation for uplift back to Singapore. 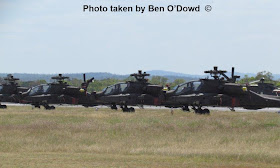 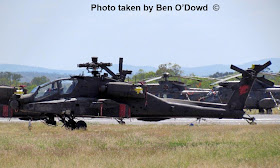 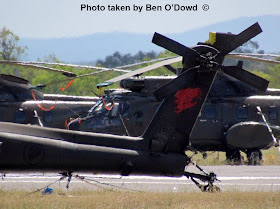 Meanwhile, several more Singapore Airlines Boeing B777 charters are expected this week to uplift the remaining personnel back to Singapore. The first was operated by B777-200 9V-SQE and arrived at Rockhampton Airport late on Tuesday 22 November.

And lastly, local spotters are expecting the arrival of an Antonov 124 over this coming weekend to complete the uplift of equipment.
Damian F at 10:05 PM
Share