On Friday 16 December, Skytrans Airlines Dash-8-100 VH-QQG called into Mackay Airport from Brisbane as SKP9008.  It had earlier flown into Brisbane from its Cairns base as SKP9007.


After about an hour on the ground, VH-QQG continued back to Cairns, continuing as SKP9008.

Meanwhile, the Far North Queensland Skies Blog has reported that former Skytrans Airlines Dash-8-300 VH-QQM departed Cairns Airport last Friday 9 December for Majuro in the Marshall Islands.  As their photo shows, after spending some time in storage painted all white, the Dash-8-300 was re-registered with Canadian registration marking of C-GCBK of Inter-Aero Inc. 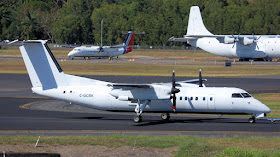 Of interest, C-GCBK has since continued to Honolulu (Hawaii), Buchanan Field (Concord, California) and Montreal (Trudeau) Airport in Canada on completion of its delivery flight (presumably) to a new operator.