The wreckage of an ultralight aircraft that went missing while on a flight from Emerald Airport has been found by a rescue crew on Thursday 18 August in bushland off the Capricorn Highway, east of Emerald. Police have confirmed the two occupants are deceased. 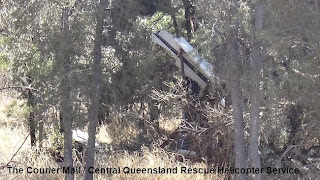 The RACQ CQ Rescue helicopter was one of several aircraft involved in the search. A Cairns-based fixed wing aircraft was also deployed to Emerald.

A well known business owner and aviation identity from Warwick was one of the victims. He had flown to Emerald on Wednesday morning and spent the day teaching another pilot – an Emerald local – how to fly an aircraft he was planning to buy.

The men are believed to have spent the day completing training sessions before setting off for their final pre-sale flight at around 3pm. They were reporting missing at 6pm.

Our thoughts and prayers are with the families and friends of the victims.