Some Spottings From Emerald Airport - Plus an Update on Apron Extensions

I spent the weekend in Emerald for cricket and of course, I managed to pop into Emerald Airport for a couple of quick visits!  On Saturday 1 December, I arrived at Emerald Airport just as the mid-morning services from Brisbane were arriving including Virgin Australia's recently introduced Saturday service.

Skywest Airlines-operated ATR 72-500 VH-FVI was operating the Virgin Australia service, which touched down from Brisbane as VOZ1257. 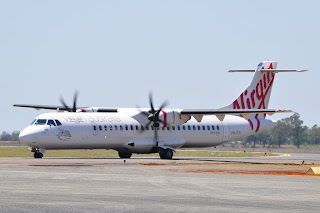 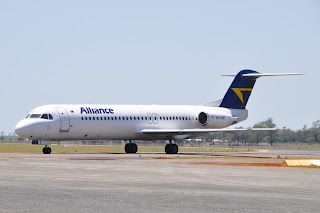 Before I departed, I also took a couple of photos of the Airport apron extension works and carpark expansion.  The photos below show the new Fly-in Fly-out (FIFO) aircraft parking apron just about ready to have the final tarmac applied.  There is also a new taxiway being added off the Runway. 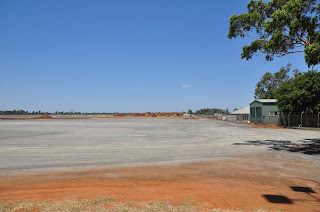 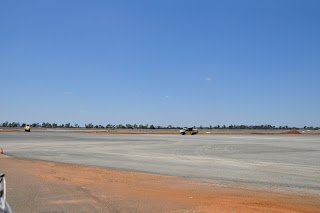 The new carpark on the Western edge of the Airport is also taking shape. 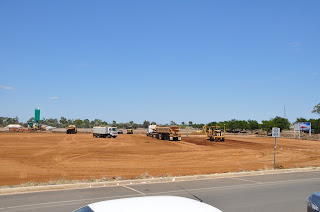 Incidentally, while I was in Emerald, on Sunday 2 December, during the afternoon and evening 'rush' of traffic into Emerald from Brisbane, I noted Alliance Airlines Fokker F-100 VH-XWM operating for QantasLink.  VH-XWM is still all white in colour.  I also noted QantasLink's own Dash-8-Q400 VH-QOI arriving and still wearing its Tamworth Country Music Festival colours.

On Monday 3 December, I arrived during the afternoon to find a busy General Aviation apron.

One of the aircraft - Bayswater Road-operated Pilatus Britten-Norman BN2A-20 Islander VH-CWG had arrived earlier in the day and is believed to be back in town to conduct some more aerial surveying. 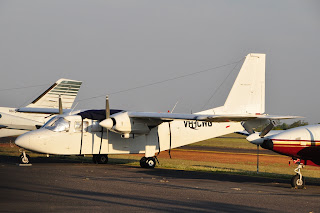 Another Baywater Road Aerial Surveying aircraft in the form of Piper PA-31P VH-SGA was also spotted at Emerald Airport on Monday 3 December. 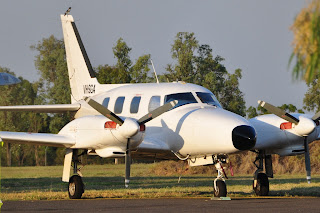 Another Piper Navajo - this time PA-31-350 VH-ATP - was spotted parked on the GA Apron.  It is a regular visit - usually on FIFO flights.  VH-ATP actually carries additional corporate titles on its rear fuselage. 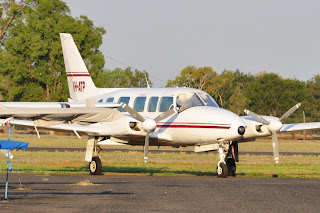 While the apron extension works are being carried out, the Toll Freight Metros are being unloaded and loaded from the Northern edge of Emerald Airport - as shown in photo below of Metro III VH-UZP being loaded on Monday 3 December.  VH-UZP carries new Toll colours and titles. 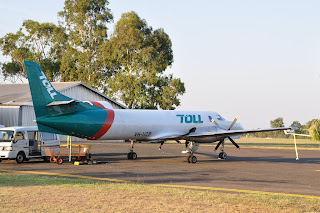 Lastly, Virgin Australia (Skywest Airlines) ATR 72-600 VH-FVN is pictured shortly after pulling onto Gate 1 after arriving into Emerald from Brisbane on Monday 3 December as VOZ1261. 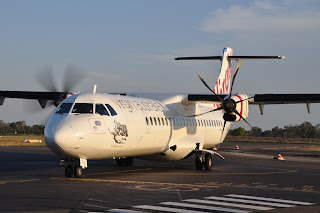 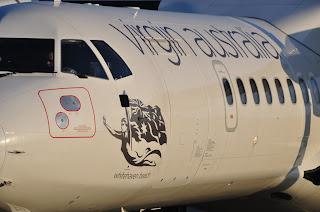 The ATR carries the name of the world-famous Whitehaven Beach in the Whitsundays!
Posted by Damian F at 7:54 AM