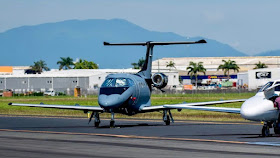 As with most other visits, it arrived from and then later departed back to Bankstown via Maitland. 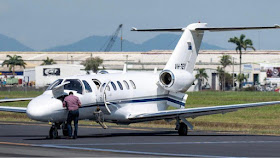 It had arrived the previous evening from Mount Isa and Charters Towers Aerodrome, and later on Wednesday, it departed to Newcastle (Williamtown).
While other bizjets noted around the region, also on Wednesday 28 September, included Australian-based but American-registered Eclipse EA500 bizjet N465DG which departed Hervey Bay (Fraser Coast) Airport for Bundaberg Airport and then the Shellharbour Airport at Wollongong and then Port Macquarie.  It looked arrive into Hervey Bay Airport from those places the previous day
Avcair Embraer 500 Phenom 100EV bizjet VH-NJR flew down from Townsville to Gladstone Airport and then Brisbane.  It flew up to Townsville from the capital earlier in the day.
And Machjet (Machjet International) Cessna 525 Citation CJ1 bizjet VH-SIY flew into Hamilton Island Airport from the Sunshine Coast. While McDermott Aviation Group / Machjet International Cessna 525A CitationJet CJ2 bizjet VH-SUY arrived into Rockhampton Airport from the Sunshine Coast and Brisbane.
Meanwhile, also spotted in the region, also on Wednesday 28 September, was a pair of brand new and recently delivered Airbus BK117D3 H145 helicopters wearing the Papua New Guinea registration markings of P2-GAS and P2-LNG. 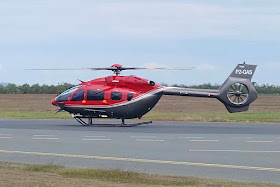 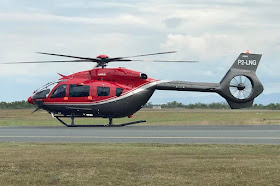 Both helicopters flew together from the Sunshine Coast (where it is believe they were imported to and built) to Rockhampton Airport and then Proserpine (Whitsunday Coast) Airport where they were photographed above.  Both helicopters then departed to Cairns.
Finally, also on Wednesday 28 September, FKG Air (Redjet Aviation) Hawker Beechcraft B200GT VH-FKB was back at Rockhampton Airport, arriving from Toowoomba and then departing to Archerfield and then Toowoomba.
Ipswich-based Airborne P/L (Palm Lake Works) Pilatus PC-12/47E VH-VLQ was also back in the region, this time noted visiting Bundaberg Airport from its Gold Coast base.
While Brescon (Toowoomba) Beech B200 King Air VH-XDW visited the Labona Station Airstrip within Adani Australia's (Bravus Mining & Resources) Carmichael Coal Mine site from Toowoomba-Wellcamp.
Seair Pacific / Istlecote Cessna 208 Caravan VH-TQW visited the Wanella Station Airstrip near Coppabella, arriving from Hervey Bay (Fraser Coast) Airport and later returning there but via Biloela / Thangool and Maryborough Airports.
Brisbane-based JGB Holdings Piper PA-31-325 VH-FHQ flew up from Brisbane to Mackay Airport and then Townsville.
And out at Longreach Airport, Link Airways (Corporate Air / Vee H Aviation) Metro 23 VH-VEK flew out from Brisbane to Longreach Airport and then Boulia and back over the same route.
While Aero Logistics / Bayswater Road Aerial Surveys Cessna 404 Titan VH-WGS looked to complete an aerial survey flight out of and back to Longreach Airport.
Photos taken by 'TM' and 'AC'  ©
Damian F at 9:47 PM
Share