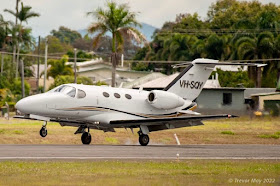 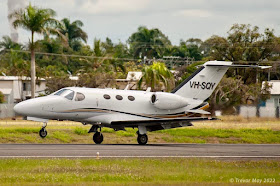 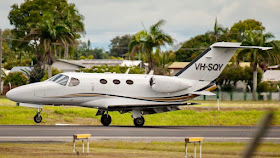 After around an hour on the ground, it departed to Townsville before then flying back down to Tamworth and Bankstown.
Also spotted visiting Mackay Airport, also on Thursday 29 September, was McDermott Aviation Group / Machjet International Cessna 525A CitationJet CJ2 bizjet VH-SUY.  It had earlier arrived from Rockhampton Airport after arriving there the previous day.

VH-SUY later departed to Brisbane and then the Sunshine Coast.
And also spotted at Mackay Airport, also on Thursday 29 September was the Queensland Government Airwing (State of Queensland) Raytheon B300 Super King Air VH-SGQ which visited from Brisbane.
Meanwhile, also on Thursday 29 September, Yulgibar Pastoral Company (of Montmorency, Victoria) Cessna 560 Citation Encore bizjet VH-YUL visited Emerald Airport from Lismore and Baryulgil.
Machjet (Machjet International) Cessna 525 Citation CJ1 bizjet VH-SIY departed Hamilton Island Airport for the Sunshine Coast.  It had arrived from there the previous day.
Zauner Aviation Pilatus PC-12/47E VH-FMM departed Hamilton Island Airport and returned to its Albury base.  It had arrived from there on Saturday 24 September.
While Armada Aviation (of Ringwood in Victoria) Pilatus PC-12/45 turboprop VH-XAQ flew up from Melbourne (Essendon) to the Whitsunday Airport at Shute Harbour.
UPDATE!  On Friday 30 September, VH-XAQ departed the Whitsunday Airport for Dubbo and then Hobart.
Flight One (Services) Beech B200 King Air VH-FON visited the Labona Station Airstrip within Adani Australia's (Bravus Mining & Resources) Carmichael Coal Mine site from Archerfield and the Sunshine Coast.
Kirkhope Aviation (of Melbourne) Beech B200 King Air VH-ZOK arrived into Longreach Airport from Cooktown and Laura.  It seems to be on a closed tourist charter and flew up from Melbourne (Moorabbin) to Far-North Queensland earlier in the week.
UPDATE!  On Saturday 1 October, VH-ZOK departed Longreach Airport for Injune Aerodrome.
And LifeFlight (Aeromed) Canadair CL-600-2B16 Challenger 604 bizjet VH-OFC "Ambulance 634" flew out of Brisbane for Rockhampton Airport before flying down to Gladstone Airport and then back to Brisbane.
Finally, also on Thursday 29 September, Hinterland Aviation 'swapped' a pair of their Cessna 208 Caravans over between Rockhampton Airport and Labona.  VH-TFS departed Rocky as HND310 and departed Labona for Townsville as HND211.  While VH-HLL flew down to Labona from Townsville as HND210 and then across to Rockhampton Airport as HND311.
It seems VH-TFQ is also still at Rockhampton Airport.
Sincere thanks to local plane spotter 'TM' for taking the time to capture and send through these great photos!
All photos taken by 'TM'  ©
Damian F at 9:49 PM
Share