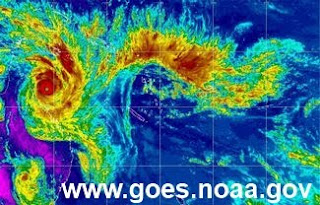 Late on Wednesday 2 February, and with the Severe Tropical Cyclone Yasi fast approaching the North Queensland coast, Mackay Airport has closed to all operations. At this stage, it is unclear how long the airport will be closed for. This comes after flights to and from Hamilton Island and Proserpine / Whitsunday Coast Airports were suspended late Tuesday, only after Jetstar and Virgin Blue put on additional flights from both airports to help holidaymakers escape the cyclone.

Several extra flights also left Townsville and Cairns Airports before they also closed early Wednesday. These were mostly operated by Qantas and QantasLink, however Jetstar and Virgin Blue also had some flights South. The Airlines are also offering passengers with north and central Queensland bookings, options to change their travel arrangements, with details on their websites.

So pretty much every airport north of Proserpine is now closed and largely deserted, with aircraft being hangared or positioned to airports to the South and West. Noted at Clermont Aerodrome on Wednesday 2 February were Piper PA-31s VH-AUG and VH-FDQ. These Chieftains are normally based in Cairns and fly regular charters over north Queensland. You can see from the pictures below that the owner has not taken any risks and has chained down their planes!

Meanwhile, there are reports that several Australian Defence Force and other Rescue helicopters have arrived at Mackay Airport on Wednesday 2 February, and have been parked in preparation for relief operations once the worst of the storm has passed.
Posted by Damian F at 5:59 AM