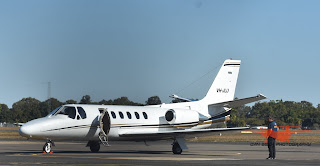 It looked to arrived from and later depart back to its Sunshine Coast base - albeit we suspect via airwork elsewhere within the Fraser Coast!

Meanwhile, it's been interesting to note that the local LifeFlight helicopter rescue base has been hosting Bell 412EP rescue helicopters.  Recently, VH-XCY and now VH-XCI have been noted (and photographed) at and around the region operating as "Rescue 522".