A Couple of Cessna Citation Bizjets - VH-HVM and VH-PSU - Pop into CQ Airports - Plus More!


It looked to arrive from and later departed back to its Sunshine Coast Base.

Also on Wednesday 20 May, the familiar sight of the Queensland Police Service (Airwing) (State of Queensland) Cessna 560 Citation Ultra bizjet VH-PSU was spotted visiting Rockhampton Airport.  It arrived from and later departed back to Brisbane. 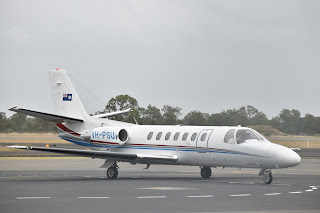 UPDATE!  VH-PSU was back at Rockhampton Airport again on Thursday 21 May.  It again visited from its Brisbane base.  It has been reported that these flights are training flights.

Meanwhile, on the lighter side of some General Aviation (GA) movements, also on Wednesday 20 May, the weekly visit by Seair Pacific / Istlecote DHC-6-100 Twin Otter VH-ZKF happened again. After arriving from the Gold Coast and Brisbane, it again departed to Bowen Airport and Townsville.  It later returned South over the same route.

Of interest, VH-ZKF is currently landing at Bowen Airport rather than Collinsville Airport as the main runway at Collinsville is undergoing works.

While McNab Aviation Cessna 414A VH-FKH flew up to Rockhampton Airport from from Toowoomba and Archerfield before it was later spotted departing to Mackay Airport.  VH-FKH then returned back directly to Toowoomba. 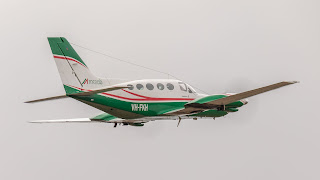 Also at Mackay Airport, also on Wednesday 20 May, BPW Aviation / Airspeed Aviation of Scone, New South Wales, Cessna 404 Titan VH-SKV visited from Brisbane.  It later departed back to Brisbane and then Tamworth.

UPDATE!  On Thursday 21 May, VH-XDW returned to Longreach Airport from Mount Isa.  It then continued to Roma Airport and Wellcamp.

UPDATE!  On Thursday 21 May, VH-WXB departed Clermont Aerodrome and also returned to Wellcamp.

While also visiting Longreach Airport, also on Wednesday 20 May, was FKG Air (Redjet Aviation) Hawker Beechcraft B200GT VH-FKB.  It arrived from and later departed back to Toowoomba-Wellcamp.

Of interest, VH-FKB continues to make visits to other CQ Airports each week including Roma and Mackay Airports, as well as Williamson Airfield within the Shoalwater Bay Training Area (SWBTA).

Sincere thanks to the Sunshine Coast Plane Spotting Facebook page for allowing us to share their great photo of VH-HVM!