Early on Thursday 25 June, Machjet (Machjet International) Cessna 525 Citation CJ1 bizjet VH-SIY was spotted on short finals for Rockhampton Airport after flying up from the Sunshine Coast and the Gold Coast. 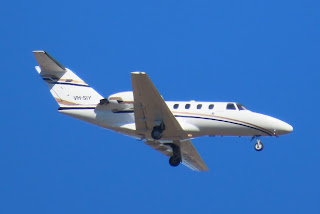 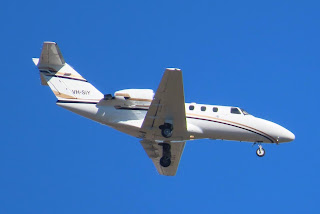 After a short time on the ground, it appears that VH-SIY departed to Archerfield.

Of interest, VH-SIY then flew up to Cairns and then back to the Sunshine Coast.

Meanwhile, also on Thursday 25 June, Tisdall Aviation (Flight One) Beech 58 Baron VH-PRG was noted also visiting Rockhampton Airport.  It looked to arrive from and later depart back to its Archerfield base.

All photos taken by Kayanne Hardsman  ©
Posted by Damian F at 8:13 PM