Recently, I noted that the Far North Queensland Skies Blog reported that former Skytrans Airlines Dash-8-300 VH-QQP left Australia for good by departing Cairns Airport on Saturday 27 May for Majuro in the Marshall Islands. 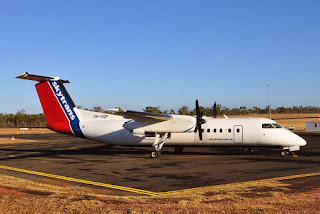 As their photo (below) shows, after spending some time in storage still painted in the old-style Skytrans livery, the Dash-8-300 was re-registered as VH-BBU of Air Fleet Management (Queensland). 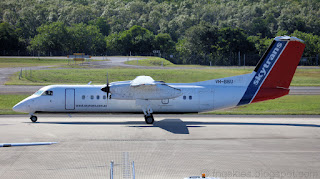 Of interest, in the days following its departure from Cairns, the Dash-8-300 was noted arriving into Toronto (Pearson) Airport in Canada on completion of its delivery flight (presumably) to a new operator.  It also appears to have taken up a new Canadian registration marking.

Additional photo taken by the FNQ Skies Blog  ©
Posted by Damian F at 9:49 AM