During a quick visit to Emerald Airport on Thursday 28 February, I was surprised to see and photograph American registered Bombardier BD-700-1A10 Global 6000 N60XC sitting on the main parking apron.  It appeared to arrive from Brisbane late on Wednesday 27 February. 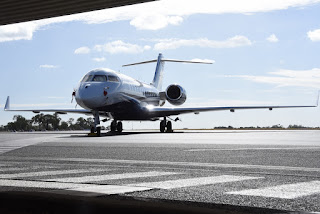 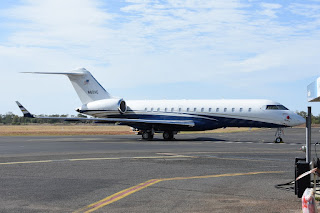 N60XC is a regular visitor to CQ and last called into Emerald Airport at the start of February.  Moreover, it appears that N60XC has remained in Australia throughout the month, operating from both Brisbane and Sydney Airports.

At the time of writing, and after spending the day parked, it appears that N60XC is spending at least another night on the ground at Emerald Airport. 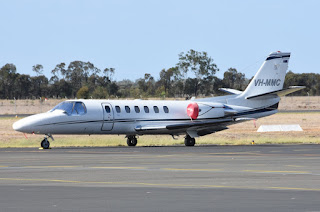 It flew across from Biloela / Thangool Airport earlier in the morning after arriving there early on Wednesday 27 February - see Blog post below.

At the time of writing, it appears that VH-MMC is also staying for at least the night.

UPDATE!  On Friday 1 March, VH-MMC departed Emerald Airport and returned to Biloela / Thangool Airport before then later returning to the Sunshine Coast.

Finally, a couple of aircraft noted ferrying through Emerald Airport also on Thursday 28 February were McGilvray Aviation (West Wing Aviation) Pilatus Britten-Norman BN2A-21 Islander VH-WQA which was noted ferrying to Archerfield from Cairns. While Heli-Aust Whitsundays' Airbus Helicopters EC135 T3 VH-XUU was noted departing Emerald Airport for Gladstone Airport on what looked to be the conclusion of a ferry flight from Port Hedland in Western Australia.

As we reported below, fellow Heli-Aust Whitsundays' Airbus Helicopters EC135 P3 VH-XUW ferried over to Port Hedland from Mackay Airport over the last couple of weeks.
Posted by Damian F at 8:47 PM