Two days after the Liberator went missing, two more B-24s flew the route but failed to find any trace of the missing bomber, focusing on the Claraville area in Far North Queensland, where the bomber was last reported at 3:00am.

Sadly, the B-24 "Beautiful Betsy" crashed into a hillside west of Biloela near Monto, roughly 80km from Gladstone, in Central Queensland, in the present day Kroombit Tops National Park.

In August 1994, park ranger, Mark Roe was checking the results of a controlled burn-off in the area and while standing on an escarpment, saw something glinting in the sunlight about 800m to the north and found the crash site and reported it to authorities.  Soon after, the Australian Army and United States Army recovery teams visited the crash site and recovered the remains of the crew who were officially declared dead the day of the mission. 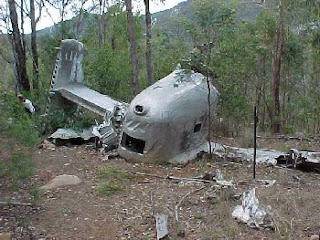 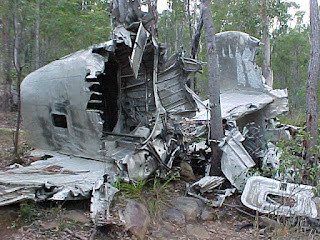 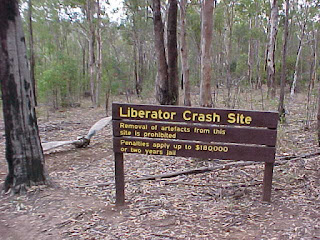 The American crew members were memorialised on the tablets of the missing at Manila American Cemetery.  After the discovery of the crash site, a bronze plaque was attached to a rock at the crash site that reads:  "In memory of the six Americans and and two British airmen who lost their lives here 27 February 1945".  After the recovery of remains in 1994, the remains of the crew and passengers were buried on September 29, 1995 at Arlington National Cemetery.

The Monto Historical and Cultural Centre features a permanent display to commemorate the crash of "Beautiful Betsy" with a replica of the B-24 Liberator in the grounds of Centre. 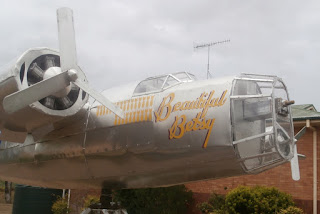 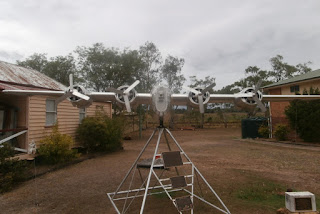 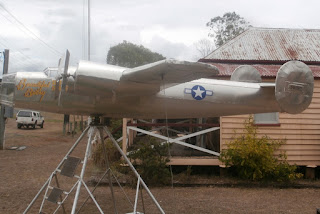 It has working propellers and once turned with the wind but it is now anchored to face the road.

More information can be found at Peter Dunn's Australia At War website (www.ozatwar.com).

Photos taken by Trevor Hardsman  ©
Posted by Damian F at 7:00 AM