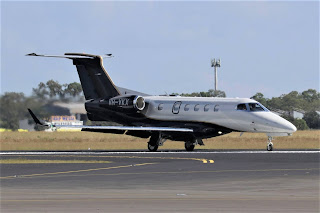 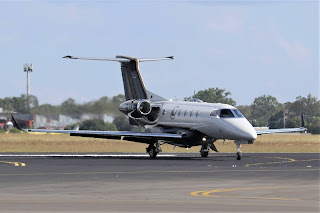 It looked to fly up from and then return to Brisbane via the Sunshine Coast.
Also noted calling into Bundaberg Airport, also on Tuesday 11 May, was Brisbane-based FIFO Jet P/L Beech B200 King Air VH-FAQ.  It looked to arrive from Archerfield before later returning there via Kingaroy.
Meanwhile, also on Tuesday 11 May, Special Mining Services / Flight Options (Australia) Embraer EMB-505 Phenom 300E bizjet VH-UYX was noted visiting Hamilton Island Airport during a busy day of flying.  It looked to arrive from Bankstown before departing to Melbourne (Essendon).
VH-UYX then flew to the Ballina/Byron Bay Gateway Airport and Sydney before returning to Bankstown.
And Mackellar Mining Equipment / Flight Options (Australia) Cessna 560 Citation Ultra bizjet VH-MMC was noted arriving into Biloela / Thangool Airport from its Sunshine Coast base.
At the time of writing, it appears to be staying for the night.
UPDATE!  Early on Wednesday 12 May, VH-MMC departed Biloela / Thangool Airport and continued to Emerald Airport.
Finally, also on Tuesday 11 May, Aircair Aviation (Aircair Helicopters) Cessna 340A VH-MPQ once again flew into Emerald Airport from Moree before continuing this time to Ayr.  It then returned directly to Moree.
Of interest, VH-MPQ called into Emerald Airport three times last week while flying between Moree, Ayr and Pinnarendi - see Blog posts below.
And Seair Pacific / Istlecote Cessna 208 Caravan VH-LYT looked to fly from Hervey Bay (Fraser Coast) Airport to Wanella Station (near Coppabella) before flying back there.
Sincere thanks to local plane spotter Peter S for taking the time to capture and send through these great photos!
All photos taken by Peter Sajko  ©
Posted by Damian F at 9:20 PM