On Wednesday 5 May, Royal Australian Air Force (RAAF) Dassault Falcon 7X bizjet, A56-002 as "Envoy 03" flew up from Canberra to Longreach Airport where it landed for a short time.  It then flew across to Hamilton Island Airport where it completed some airwork including at least one missed approach. 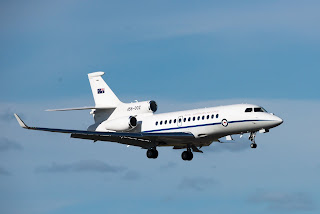 Meanwhile, also on Wednesday 5 May, Cirrus SR22 VH-CWG called into Rockhampton Airport from the Sunshine Coast.  It then departed to Tambo and back to the Sunny Coast.  VH-CWG came up that way on Monday 3 May.

And Cirrus SR22 VH-YJX, which usually comes to Rockhampton Airport each Wednesday, flew to Emerald Airport, arriving from and later departing back to the Sunshine Coast as well.

Finally, also on Wednesday 5 May,  Aircair Aviation (Aircair Helicopters) Cessna 340A VH-MPQ called into Emerald Airport from Ayr.  It then flew down to Moree in New South Wales.
Photo taken by Scott Harris  ©
Posted by Damian F at 11:49 PM