On Monday 31 May, Pionair Australia British Aerospace BAe-146-200 VH-SYO was noted arriving into Longreach Airport on what looked to be a closed charter flight from Bankstown via Sydney and Brisbane.  It arrived as 'SFZ605' / "Skyforce 605". 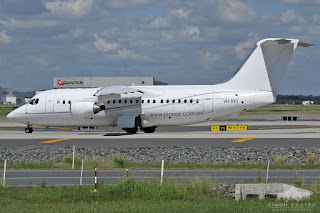 At the time of writing, appears that VH-SYO is staying at Longreach Airport at least the night with reports suggesting that it is on a closed tourist charter flight.
UPDATE!  VH-SYO departed Longreach Airport for Winton and then Mount Isa on Wednesday 2 June.
UPDATE!  VH-SYO was back in the region at the conclusion of this charter flight, arriving into Hamilton Island Airport from Weipa and Horn Island on Sunday 6 June and then departing Hamo back to Brisbane and Sydney on Monday 7 June.
Meanwhile, also on Monday 31 May, there was seemingly another closed tourist charter flight at Longreach Airport, this time being flown by Seair Pacific / Istlecote Cessna 208 Caravan VH-TQW.  It departed to Rockhampton Airport and then Lady Elliot Island.
It looks like VH-TQW arrived into Longreach Airport from Birdsville over the weekend, having departed the Gold Coast and Charleville Airports last Friday 28 May.
Photo taken by Simon Coates  ©
Posted by Damian F at 9:32 PM