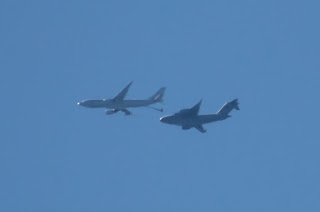 The two C-17s were identified as A41-206 and A41-207 looked to fly up together as "Charger" from RAAF Base Amberley to meet with KC-30 A39-007 "Dragon 61" which had also earlier departed Amberley.
One of the C-17s was spotted being refuelled off Bundaberg after meeting up near Hervey Bay.  All three aircraft continued North to East of Mackay before they then turned around and flew back South, again off the coast.
Between Hervey Bay and Fraser Island the two C-17s separated from the KC-30 and turned inland towards Gayndah.  Nearing there they descended to below 5000ft and operated from ground to that level, and flew from South of Gayndah back East to near Gympie then back West past Gayndah to near Taroom then back East to a position South-West of Gayndah before climbing back to flight-levels to West of Kingaroy and then back to Amberley.
Meanwhile, also on Tuesday 18 May, Royal Australian Air Force (RAAF) Alenia C-27J Spartan transport aircraft A34-002 as "Kaos 57" flew down from Cairns to complete airwork in the Proserpine and Shute Harbour areas before completing a missed approach at Rockhampton Airport.  The Spartan then flew to Amberley.
Of interest, it had left Amberley on Sunday 16 May for Charleville Airport where it spent the night.  On Monday 17 May, A34-002 continued from there to Weipa and then back to Cairns.
Photo taken by Locky Halliwell  ©️
Posted by Damian F at 10:27 PM