On Friday 3 February, sleek ElaineBrown LLC (of Anchorage, Alaska) Gulfstream Aerospace G-V-SP (G550) bizjet N126EB was noted arriving into Hamilton Island Airport.  It flew down from Cairns after earlier being photographed arriving there from Papeete, Tahiti. 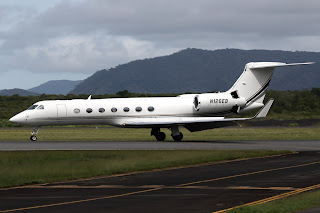 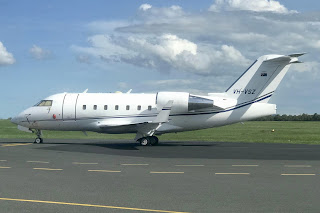 At the time of writing, it appears that VH-VSZ is staying at Prosie for at least the night.
UPDATE!  On Sunday 5 February, VH-VSZ departed Proserpine (Whitsunday Coast) Airport for Brisbane.  It is due to continue to Sydney on Monday 6 February.
And Jetstream Aviation (Emprja P/L) Cessna 550 Citation II VH-VDF was photographed before flying down from Proserpine (Whitsunday Coast) Airport to the Sunshine Coast.  It flew up from there on Sunday 29 January. 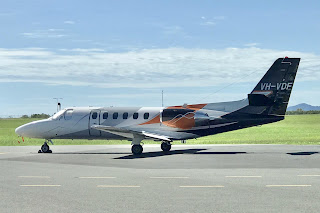 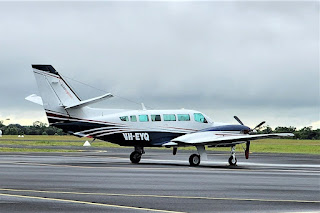 It then flew out to Emerald Airport where it was photographed above earlier in the week.
Photos taken by Jonathan Williams and 'AC'  ©
Posted by Damian F at 10:57 PM 0 comments

On Friday 3 February, Royal Australian Air Force (RAAF) Boeing B737-7ES / E-7A Wedgetail Airborne Early Warning & Control (AEW&C) aircraft A30-001 was noted completing a missed approach at Hervey Bay (Fraser Coast) Airport.
A30-001 was flying as "Mitchel 22" and looked to fly up to Hervey Bay from RAAF Base Williamtown near Newcastle in New South Wales via a missed approach at RAAF Base Amberley. After completing its airwork at Hervey Bay Airport, A30-001 "Mitchel 22" returned back direct to Williamtown

Meanwhile, also on Friday 3 February, Royal Australian Air Force (RAAF) Alenia C-27J Spartan transport aircraft A34-003 as "Wallaby 15" was noted completing airwork at Bundaberg Airport while on a flight out of and back to Amberley.
Posted by Damian F at 8:57 PM 0 comments 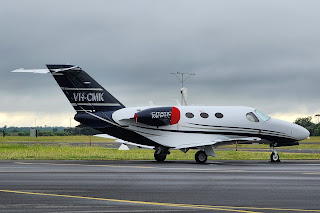 At the time of writing, it appears to be staying for at least the night.
UPDATE!  VH-CMK was photographed above early on Wednesday 1 February.  It later departed Emerald Airport for the Sunshine Coast and is due to continue to Bankstown early on Thursday 2 February.
While MacKellar Mining Equipment Pty Ltd (Revesco Aviation) Cessna 680 Citation Sovereign bizjet VH-MMC was noted making what seems to be its weekly visit to the Labona Station Airstrip within Adani Australia's (Bravus Mining & Resources) Carmichael Coal Mine site.  It looked to arrive from and then later depart back to its Sunshine Coast base.

Meanwhile, also on Tuesday 31 January, FKG Air (Redjet Aviation) Hawker Beechcraft B200GT VH-FKB looked to fly up from Toowoomba and Archerfield to the Samuel Hill Aerodrome within the Shoalwater Bay Training Area (SWBTA).  It later returned to Archerfield and Toowoomba.
The Queensland Police Service (Airwing) (State of Queensland) Raytheon B1900D VH-PSK arrived into Rockhampton Airport from Cairns and Townsville before later departing to Brisbane.  It then returned to Townsville and Cairns
Brisbane-based Hewitt Cattle Australia P/L SOCATA TBM 700 VH-PGA completed two visits to Moura Aerodrome both times from Archerfield.
Telford Aviation Beech A36 Bonanza VH-MPT flew up from Archerfield to Roma Airport and then to Agnes Water Airstrip.
UPDATE!  Late on Wednesday 1 February, VH-MPT departed Agnes Water Airstrip for Biloela / Thangool Airport and then onwards back to Archerfield.
Finally, also on Tuesday 31 January, Hinterland Aviation Cessna 208 Caravan VH-LZK was yet again noted completing a Fly-in Fly-out (FIFO) charter flight from Mackay Airport from the Labona Station Airstrip within Adani Australia's (Bravus Mining & Resources) Carmichael Coal Mine site and back.  It flew down from Townsville to Mackay Airport and then out to LAbona and back to Mackay Airport and then Townsville as HND290/1/2/3.
UPDATE!  On Wednesday 1 February, fellow Hinterland Aviation Cessna 208 Caravan VH-TFQ was noted completing the Labona Station Airstrip run to and from Mackay Airport.  It flew down to Labona from Townsville before flying across to Mackay Airport and back to Labona and then back to Townsville as HND280/1/2/3.
And Hinterland Aviation Cessna 208 Caravans VH-JES and VH-HLL are currently based at Rockhampton Airport and are operating the 3-4 week-daily flights from there to Labona and back.
Photo taken by 'AC'  ©
Posted by Damian F at 10:05 PM 0 comments

Also on Tuesday 31 January, Royal Australian Air Force (RAAF) Boeing B737-7DF(BBJ) A36-002 was photographed at Bundaberg Airport soon after touching down from Canberra and Coffs Harbour as "Envoy 71". 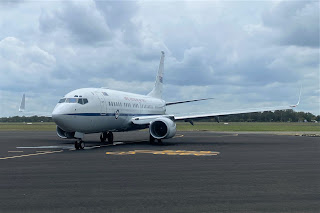 After a short time on the ground, the BBJ departed North and then landed at Hamilton Island Airport.
A36-002 "Envoy 71" then made a surprising return all the way back down to Canberra.
Photo taken by Hayden Matthew Alexander  ©
Posted by Damian F at 9:49 PM 0 comments

On Tuesday 31 January, Royal Australian Air Force (RAAF) Boeing B737-7ES / E-7A Wedgetail Airborne Early Warning & Control (AEW&C) aircraft A30-006 was noted completing a missed approach at Rockhampton Airport.
It looked to fly up from and then later return to RAAF Base Williamtown.
A30-006 was heard to be using the radio callsign "Mitchel 06".
Of interest, A30-006 is a rare visitor to the region, having spent much of 2021 and all of 2022 based at RAAF Base Tindal in the Northern Territory.
As mentioned previously, six Wedgetails are flown by the RAAF's No. 2 Squadron out of RAAF Base Williamtown, along a detachment also in the Northern Territory.
Meanwhile, also on Tuesday 31 January, RAAF Boeing C-17A Globemaster III transport aircraft A41-209 as "Stallion 34" was back in the region.  It flew down from Townsville to a complete a missed approach at Proserpine (Whitsunday Coast) Airport before then landing at Rockhampton Airport.
The C-17 was parked on Taxiway Juliette again for a crew change before it departed to RAAF Base Amberley.
As posted below, A41-209 "Stallion 34" also called into Rockhampton Airport and completed airwork at Mackay Airport while flying up from Amberley to Townsville on Monday 30 January.
Photo taken by Graham Aspinall  ©
Posted by Damian F at 9:39 PM 0 comments

A historic day on Tuesday 31 January as Bonza Airline took the skies for its first ever commercial passenger flight, becoming the first new carrier to launch in Australia in 16 years. 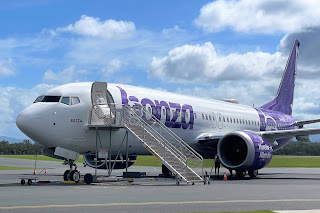 Boeing B737-8 MAX VH-UIK - named 'Bazza' - touched down at the Proserpine (Whitsunday Coast) Airport as 'BNZ777' a little behind schedule from the Sunshine Coast, also after completing a short scenic flight over Airlie Beach and Whitsundays.
After a day of festivities for invited guests, VH-UIK returned to the Sunny Coast late in the day from Prosie but as 'BNZ778'.
Bonza will fly three Sunshine Coast to Proserpine (Whitsunday Coast) Airport services per week.  This is the first of 27 new domestic routes to 17 destinations set to roll out in coming months - 26 of which are not currently serviced by any other airlines.
Bonza's long-delayed launch comes after receiving regulatory approval by the Civil Aviation Safety Authority (CASA) on Thursday 12 January.  Presently, flights to 12 destinations across 15 routes are available to book through their app or through registered travel agents.
Bonza has three B737-8 MAX aircraft in its fleet all based at the Sunshine Coast - VH-UJT - named 'Shazza' - and VH-UIK - named 'Bazza' - and VH-UJK - named 'Sheila'.  It also becomes the first local carrier to operate the B737-8 MAX in Australia.
Posted by Damian F at 7:55 PM 0 comments

Brisbane-based Crockett Aviation Group Beech B200 King Air VH-FAQ also visited the Labona Station Airstrip within Adani Australia's (Bravus Mining & Resources) Carmichael Coal Mine site but from Archerfield and the Sunshine Coast.
Hinterland Aviation Cessna 208 Caravans VH-HLL (from Rockhampton Airport) and VH-LZK, VH-TFQ and VH-JES (all from Townsville) also visited Labona during the day.
And Skytrans Airlines Dash-8-100 VH-QQC arrived into Rockhampton Airport from Cairns and Proserpine (Whitsunday Coast) Airport as SKP85/780 before then flying to Labona and back to Rockhampton Airport as SKP771/2.  Fellow Skytrans Dash-8-100 VH-QQG flew to Labona from Townsville and back.
Meanwhile, also on Monday 30 January, the Queensland Police Service (Airwing) (State of Queensland) Raytheon B1900D VH-PSK visited Rockhampton Airport from Cairns.
And Hawker Beechcraft G58 Baron VH-EZD flew out of Hamilton Island Airport and back to its Monto Aerodrome base.  It flew up to Hamilton Island Airport last Wednesday 25 January.
Finally, also on Monday 30 January, Cessna 510 Citation Mustang bizjet VH-PAC was again noted visiting Hervey Bay (Fraser Coast) Airport.  It looked to arrive from and then later depart back to the Sunshine Coast where it seems to be currently based.
Photo taken by Lloyd Fox  ©
Posted by Damian F at 9:12 PM 0 comments

Late morning on Monday 30 January, a pair of Royal Australian Air Force (RAAF) heavy transport aircraft were photographed as they approached Rockhampton Airport, with one landing for a short while and other completing a missed approach. 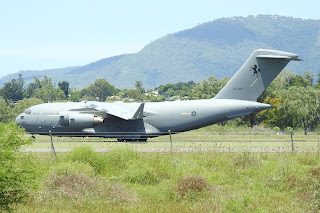 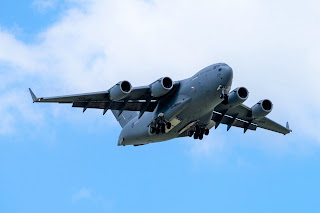 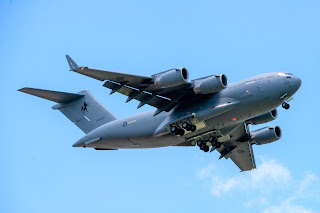 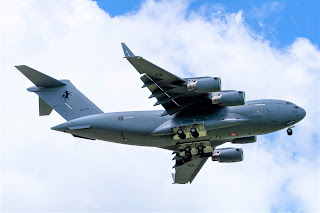 It parked on Taxiway Juliette for a crew change before then departing to Townsville via a missed approach at Mackay Airport.
Then RAAF Airbus A330-200 / KC-30A Multi Role Tanker Transport (MRTT) A39-005 as "Dragon 41" also flew up to Rockhampton Airport from Amberley. 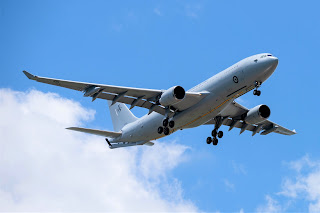 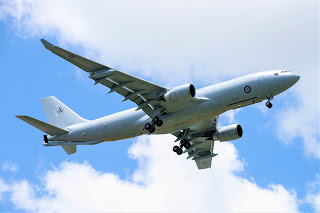 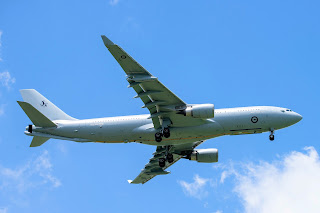 It was heard to be preparing to land but with the C-17 already on the ground, the crew decided to instead complete a missed approach and continue on to the Sunshine Coast where it completed more airwork.  The KC-30A then returned to Amberley.
Sincere thanks to local plane spotters John L and Scott H for taking the time to capture and send through these great photos!
Photos taken by John Lee and Scott Harris  ©
Posted by Damian F at 8:12 PM 0 comments