A nice Boxing Day for spotters on Sunday 26 December with a brand new Global 7500 bizjet popping into Hamilton Island Airport.  Lance East Aviation (Seletar Jet Charter) Bombardier BD-700-2A12 Global 7500 bizjet VH-LON looked to arrive from Sydney and then later depart to Brisbane where it was spotted below. 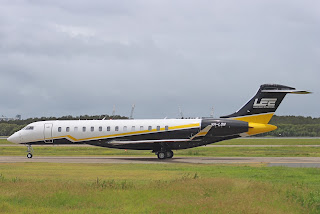 VH-LON then returned to Sydney.
Of interest, the brand new Global 7500 bizjet is only one month old, been on the Australian register for only five days and only been in Australia a couple of days since its delivery from overseas.
Meanwhile, also on Sunday 26 December, BHMM Aviation (Flight Options - Australia) Cessna 650 Citation VII bizjet VH-SSZ was noted also calling into Hamilton Island Airport.  It arrived from and then later departed back to the Gold Coast.
While Bowenville (near Toowoomba) based Cessna 525 CitationJet CJ1+ bizjet VH-JSZ visited Rockhampton Airport again, arriving from and later departing back to Archerfield.  It did the same on Christmas Eve - Friday 24 December.
And GBJ Nominees (Navair Flight Options) Textron Aviation (Cessna) 510 Citation Mustang bizjet VH-IEQ departed Bowen Airport for Hamilton Island Airport before it then flew down to Archerfield and Bankstown.
VH-IEQ had arrived into Bowen Airport from Bankstown late on Thursday 23 December.
Finally, also on Sunday 26 December, DeGunst Transport P/L Textron (Cessna) 208 Caravan VH-NPZ flew up from its Bundaberg Airport base to Rockhampton and then Nebo Airports before it then returned to Bundy.
While Hinterland Aviation Cessna 208 Caravan VH-NDC as 'HND450' departed Rockhampton Airport for Bowen Airport before it then flew down to the Labona Station Airstrip within Adani Australia's (Bravus Mining & Resources) Carmichael Coal Mine site and then back to Rockhampton Airport.
And Navair Flight Operations Cirrus SR22 VH-FSF landed at Emerald Airport from Bankstown before it then departed to Innisfail.
Photo taken by Lloyd Fox  ©
Posted by Damian F at 9:05 PM