The Australian Safety Transport Bureau (ATSB) has released a report into an incident where a Mackay Airport safety officer came within a whisker of causing a major plane crash - all because he decided to answer his mobile phone while driving.

The report found the officer had mistakenly driven his car 30 feet under a charter flight to Emerald after it had just taken off.  The flight was being operated by Advance Aviation Piper PA-31-300 VH-LWW. 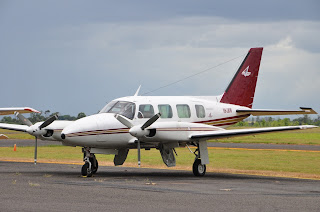 The officer was "conducting an airfield runway and lighting inspection in an airfield safety vehicle" when he was "distracted by a telephone call and continued", crossing the path of the oncoming plane.

The incident happened in late June this year.

The report said airport air traffic controllers had instructed the safety officer to hold short of the runway just moments before he received the telephone call.  "The (airport safety officer) became aware of VH-LWW as the aircraft passed overhead the vehicle," the report said.

"He immediately realised what had occurred, terminated the telephone call and exited the runway."

Mackay Airport has announced that appropriate safety measures have been taken following the incident.
Posted by Damian F at 11:59 PM