Polet Aviakompania (Polet Airlines) Antonov 124-100 RA-82068 is expected to arrive into Rockhampton Airport on Monday 26 November as "POT4789" from Chennai, India.  It is expected to touch down at around 9.30am. 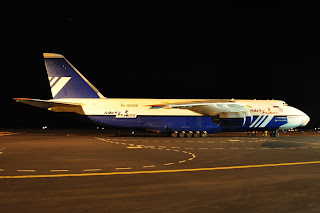 The Antonov is the same aircraft that was at Rockhampton at the start of October - as shown above.  It is expected to carry the five Republic of Singapore Air Force (RSAF) Boeing AH-64D Apache helicopters home to Singapore after they took part in the Singapore Armed Forces Military Exercise Wallaby 2012 that has been held in the Shoalwater Bay Training Area (SWBTA) over the last two months. 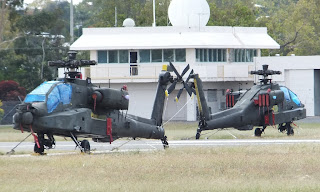 As the photos above show, the Apaches have been packed up and are ready to travel!
Posted by Damian F at 8:52 PM