On Thursday 3 September, Mackellar Mining Equipment / Flight Options (Australia) Cessna 560 Citation Ultra bizjet VH-MMC was photographed by me visiting my local Clermont Aerodrome.  It is the second visit by the sleek Citation into a Central Queensland Airport this week with VH-MMC also visiting Rockhampton Airport on Tuesday 1 September.  VH-MMC is also becoming a fairly regular visitor to my local Clermont Aerodrome with visits occurring every couple of weeks over the previous month or so. 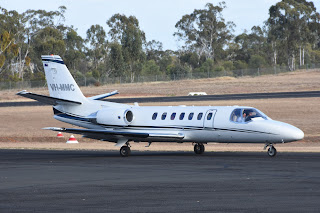 On this occasion, it appears that the passengers from VH-MMC then joined Hinterland Aviation Cessna 208 Caravan VH-ETF, which had earlier arrived direct from Rockhampton Airport as HND310. 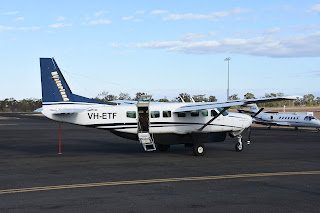 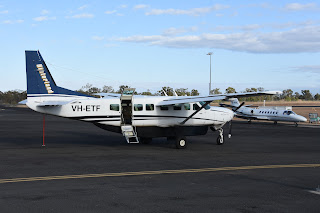 VH-ETF then departed as HND3101 up to the Labona Station Airstrip within Adani Australia's Carmichael Coal Mine site.  It then returned to Rocky but as HND3110.

At the time of writing, VH-MMC appears to be closed up and staying for the night at Clermont Aerodrome. 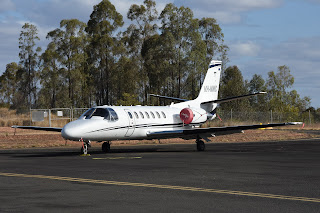 Meanwhile, also on Thursday 3 September, another Cessna Citation bizjet an Australian Country Choice Properties (Brisbane) Cessna 560 Citation V Encore bizjet VH-ACC progressed around some of their properties. It departed Opal Creek for Brindley Park then Wellclose and then Babbiloora, West of Carnarvon.

Finally, a few smaller light General Aviation (GA) aircraft and a helicopter to be noted visiting CQ Airports also on Thursday 3 September included Brescon (Toowoomba) Beech B200 King Air VH-WXN which arrived into Labona from Toowoomba-Wellcamp and looks to be spending the night.

South Australian-based Ted Smith Aerostar 601P VH-YRD was noted departing the Whitsunday Airport at Shute Harbour for the Gold Coast.  It had arrived there from Cairns on Monday 31 August.

And South Australian-based Evalex P/L Cessna 208 VH-JXB landed at Longreach Airport from the Gold Coast. It had flown into there from Adelaide via Charleville Airport last Thursday 27 August and Friday 28 August.
UPDATE!  After spending the night, VH-JXB departed Longreach Airport for ports to the South West on Friday 4 September.
Posted by Damian F at 11:07 PM