After some time away from the region, on Wednesday 2 September, Seair Pacific / Istlecote DHC-6-100 Twin Otter VH-ZKF was noted back on the weekly Fly-in Fly-out (FIFO) charter flight from the Gold Coast and Brisbane (as shown) to Rockhampton and Collinsville Airports. 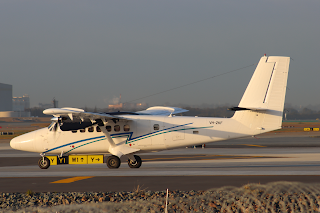 On this occasion though, VH-ZKF popped into Proserpine (Whitsunday Coast) Airport before heading to Collinsville Aerodrome and then Townsville.
As usual, VH-ZKF then reversed the flight calling back into Rocky before heading to Brisbane and the Gold Coast.
Another weekly FIFO run was completed on Wednesday 2 September with FlyPelican (Pelican Airlines) British Aerospace BAe Jetstream 3206 (Jetstream 32) turboprop aircraft VH-OTQ back on the run from Rockhampton Airport to Hughenden and Julia Creek.  It flew out on Tuesday 1 September as PE998 and returned to Rocky from Julia Creek early on Wednesday as PE999.
Meanwhile, also noted around the region, also on Wednesday 2 September, was FKG Air (Redjet Aviation) Hawker Beechcraft B200GT VH-FKB which visited Mount Coolon Airport from Toowoomba.
At Charters Towers Aerodrome, Brisbane-based Altitude Aviation Beech B200 King Air VH-ISS completed its weekly FIFO run, arriving from Archerfield also on Wednesday 2 September.  It is due to return South on Thursday 3 September.
Brisbane-based Piper PA-31-350 VH-RPV flew into the Labona Station Airstrip within Adani Australia's Carmichael Coal Mine site from Archerfield before departing back there via Emerald Airport.
And Brescon (Toowoomba) Beech B200 King Air VH-WXN also flew into Labona but from Toowoomba-Wellcamp.  It is due to return to Wellcamp early on Thursday 3 September.
Finally, sometimes Bundaberg-based Hawker Beechcraft G58 Baron N298WA was noted flying into there from the Gold Coast also on Wednesday 2 September.  N298WA returned to the Gold Coast a short time later.
Photo taken by Lloyd Fox  ©
Posted by Damian F at 9:32 PM