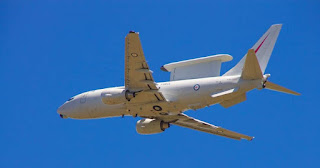 It was flying as "Wedgetail 10" and came up from RAAF Base Williamtown to Rocky before it returned there via another missed approach at RAAF Base Amberley.

Meanwhile, a little earlier also on Wednesday 2 September, Australian Army NH Industries MRH-90 Multi-Role Helicopter A40-036 "Destrier 103" was noted passing through Rockhampton Airport.  It arrived from Townsville and later departed to Brisbane via a missed approach at Bundaberg Airport.
And fellow Australian Army MRH-90 helicopter A40-011 was noted flying around Fraser Island while on a flight out of and back to Oakey as "Saxon 38".

All photos taken by Michael Malick  ©
Posted by Damian F at 8:59 PM