On Thursday 7 January, Brisbane-based Altitude Aviation Raytheon B200 King Air VH-EEL was spotted visiting Mackay Airport.  It looked to arrive from and then later depart back to its Archerfield base. 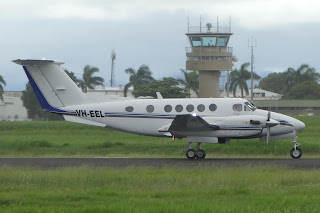 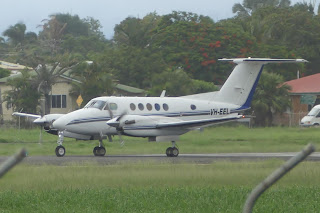 As mentioned previously, VH-EEL was previously operated by the Royal Flying Doctor Service of Australia (RFDS) as VH-FDD.  It operates alongside another former RFDS King Air, VH-FDF, which flys with Altitude Aviation at VH-NQF.
Meanwhile, also on Thursday 7 January, New South Wales-based Beech 95-A55 Baron VH-ISA departed the Whitsunday Airport at Shute Harbour for the Gold Coast.  It had flown North from Canberra via Roma and Mackay Airports on Tuesday 5 January.
All photos taken by 'JM'  ©
Posted by Damian F at 10:21 PM