The recent devastating floods throughout Central Queensland have affected the regions airports and air services.

In Rockhampton, with the flooding of the Fitzroy River expected to reach its peak by Tuesday, Rockhampton Airport will cease normal domestic passenger (RPT) services on Saturday 1 January. It is expected that it will remain closed for 10 days.

The Royal Flying Doctor Service has reportedly evacuated their airport facilites, and flown their two locally based aircraft - Beech B200 King Airs VH-FDR and VH-FDW - to other airports in Queensland.

The Rockhampton Regional Council has advised that all vehicles should be removed from the airport carparks, with the paid parking system being deactivated.

With the airport closing, the Rockhampton Regional Council has requested assistance from the Australian Army, with the possibility of Sikorsky S-70A Blackhawks arriving in Rockhampton to conduct evacuations and other duties.

Also, on Thursday 30 December, three Toll Priority metros were noted at Rockhampton Airport flying in tens of thousands of extra sandbags on delivery to the Central Region Emergency Management Group (EMG), who supply bags to SES volunteers. Meanwhile, on Friday 31 December, it was reported that aviation fuel supplies in Rockhampton were completely depleted, with a new supply having to be trucked to town. Local helicopter firms are also facing depleted stocks of the chopper fuel, with one firm believed to be trucking in Avgas from Townsville to continue operating.

In Emerald, passengers travelling into Emerald Airport are being advised to change their travel plans as Emerald Airport has been cut off from the main township since Thursday 30 December. The Local Disaster Management Group is monitoring incoming passengers from QantasLink services and if the majority of passengers have to be accommodated in emergency accommodation the LMDG will have no choice but to ask for services to be cancelled.

So with the airport inaccessible from the main township, emergency and privately owned helicopters are landing and taking off from the Pioneer Park Racecourse in the centre of Emerald.

It is believed that Australian Army Sikorsky S-70A Blackhawk helicopters were deployed from Townsville on Thursday 30 December to evacuate local residents to the airport.

It was also noted that Queensland Premier Anna Bligh visited the town Friday 31 December in the Queensland Governments Hawker 850XP Bizjet. She later overflew the town in one of the Blackhawks.

Also, it is beleived that Central Park Helicopters (of Springsure) Robinson R22, VH-PUG, crashed at the Emerald Racecourse on Thursday 30 December. The privately owned chopper reportedly lost control and flipped on its side shortly after taking off. The pilot was the only person on board and was not seriously hurt. Channel Seven News reporter Peter Doherty took this photo HERE

CQ Planespotting is thinking of those who have been affected by the flooding.
Posted by Damian F at 9:19 PM 0 comments

Bowen’s location within the Whitsundays region of Central Queensland, is at the edge of the Coral Sea and The Great Barrier Reef.

As you can see, the airport isn't that big, with only Cessna 172 VH-BNC present on Thursday 23 December, but within the airport grounds, the Bowen Lions Club's Coral Sea Memorial dioramas can be found within the building next to the Aero Club. 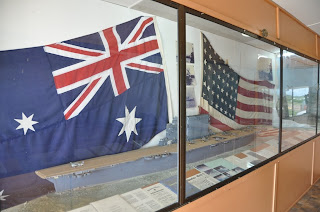 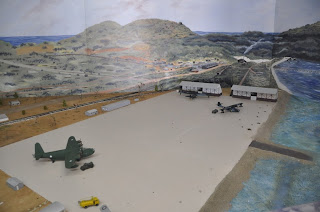 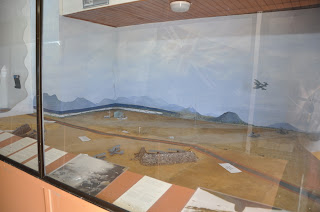 One of the other attractions at Bowen (or Bowenwood) is the Big Mango at the Visitor Information Centre.
Posted by Damian F at 2:33 PM 0 comments

Photo of Weststar Aviation B737-200 at Rockhampton Airport 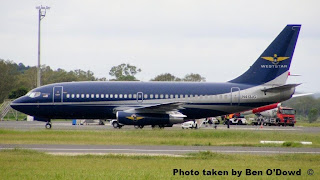 With thanks to Ben O, who managed to find a break in the rain on Friday 24 December, comes a photo of the beautifully coloured Weststar Aviation Boeing B737-200 N413JG that has been parked at Rockhampton Airport for the last few days.
Posted by Damian F at 7:24 AM 0 comments 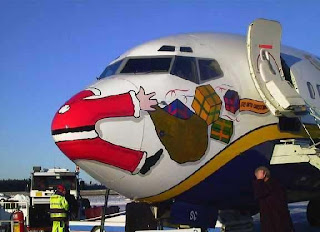 To the followers of CQ Plane Spotting, and all the other visitors to our website, we hope that you and your families all have a very happy and safe Christmas!!

Hopefully Santa did make it to your place!!
Posted by Damian F at 9:54 AM 0 comments

The brand new aircraft was only delivered to Virgin Blue the previous week.

It is believed that Wednesday's service - DJ1251/DJ1252 - Brisbane to Rockhampton to Brisbane - was the first revenue service for this aircraft.

Classic Boeing B737-200 at Rockhampton Airport

In a real surprise for local spotters, Boeing B737-200, N413JG of Weststar Aviation, arrived at Rockhampton Airport early on Wednesday 22 December from the Gold Coast. The classic Boeing is currently parked on Bay 1 under the old control tower. It is due to stay parked there until after Christmas.

No photos are currently available as there is torential rain at Rockhampton at the moment!
Posted by Damian F at 9:42 PM 0 comments

This intrepid blogger is currently on a big road trip all over Queensland, arriving today in Townsville from a couple of nice spotting days in Cairns. On the way up North, I passed through Charters Towers - a lovely little town which lies 138 kilometres south-west of Townsville, on the Flinders Highway. So despite being this close to the capital of North Queensland, I would like to consider Charters Towers still to be part of Central Queensland!!

Charters Towers is an historic city built on gold, flourishing during the bustling gold boom of the late 1800s. By the turn of the century it had become Queensland's second largest city, and the honour of having one of the first regional Stock Exchanges built in 1888. A golden city with a colourful past, the lively heritage brings Charters Towers to life, and makes this town a must see on any itinerary.

Anyway here are some images captured on Saturday 11 December at the Airport, showing the small terminal and the apron area and maintenance hangars. There is a good array of stored and visiting aircraft parked on the field. Most are owned locally, with many in line for restoration and sale elsewhere in Australia and overseas. Spotting is easy - over the waist high fence! 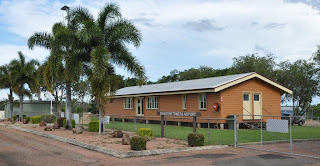 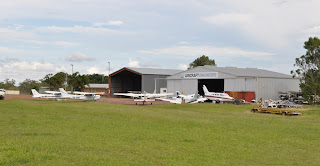 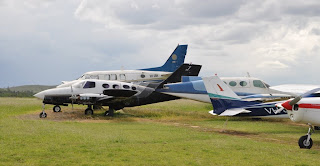 There is also this interesting warning sign... only in country Queensland!! 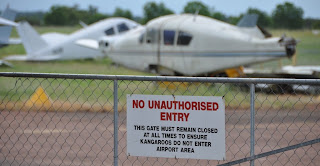 There has been a light plane crash on Great Keppel Island off central Queensland on Saturday 18 December.

All four people onboard suffered minor injuries when the aircraft ran off the runway at the Great Keppel Island Aerodrome.

Police said they were told at 12.24pm (AEST) about the crash on the central Queensland holiday island.

The aircraft is reported to be a Cessna 182, and eyewitness pictures suggest it could be VH-DOK of Peace Aviation in Rockhampton.
Posted by Damian F at 8:59 PM 0 comments

QantasLink has announced this week that it would launch its flagship Bombardier Dash-8-Q400 regional aircraft on its Brisbane to Blackall and Brisbane to Barcaldine routes from early February 2011.

QantasLink currently operates two flights per week to each town. The airline will add the extra service each week to Blackall from 9 February 2011 and to Barcaldine from 12 February 2011.

The move will follow the completion of upgrades to the airports at both Barcaldine and Blackall.
Posted by Damian F at 7:36 PM 0 comments

US Global Express calls in at Gladstone Airport

Jetstar's newest logojet - A320-200 VH-VQN - which has decals for the Telstra Next G Force mobile phone network made daily visits in Mackay recently, with the aircraft first noted on Wednesday 1 December operating the JQ888/889 service from/to Brisbane. It then returned on the same service for the next five days.

Also over the last couple of weeks, Jetstar have sent some of their newest A320-200 aircraft on the various Brisbane-Mackay-Brisbane runs, with VH-VGF, VH-VGH, VH-VGI, and VH-VGJ all noted in the last week.
Posted by Damian F at 9:29 PM 0 comments 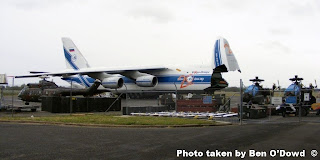 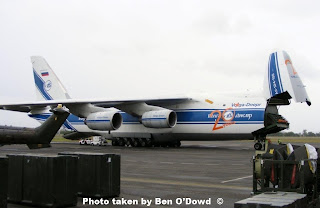 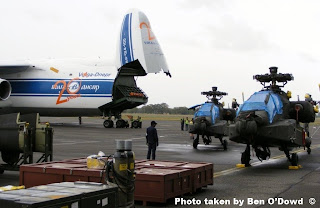 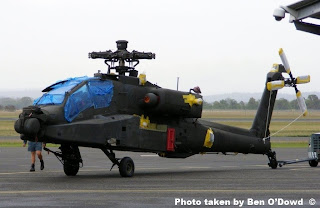 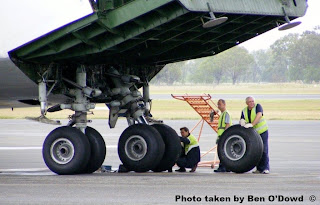 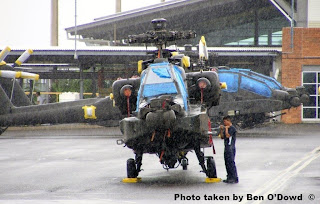 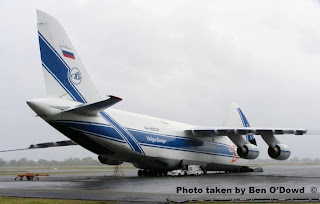 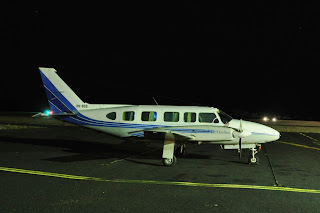