Some Weather Delays and Diversions at CQ Airports - QLink B717-200 VH-NXO Lands at Longreach Airport!

Certainly some inclement weather is affecting parts of Central and North Queensland in recent days and on Saturday 30 January, storms and heavy rain over Mount Isa caused a flight from Brisbane to divert and land at Longreach Airport.

It was certainly a surprise to note that QantasLink (Cobham Aviation) Boeing B717-200 VH-NXO diverted to Longreach while operating the QJE1780 service from Brisbane to Mount Isa.  It appears that VH-NXO was overhead Mount Isa and held at 14000 feet for sometime before being forced to divert to Longreach.

After around 90 minutes on the ground, VH-NXO eventually continued to Mount Isa as QJE1780 before landing successfully.  It then operated a somewhat delayed QJE1781 service back to Brisbane.

Meanwhile, on Sunday 31 January, it appears that there were no commercial flights in or out of Moranbah Airport.  I noted that the afternoon QantasLink Dash-8-Q400 operated service from Brisbane - QLK2464 operated by VH-QON - landed at Mackay, while the Virgin Australia ATR 72 operated service from Brisbane - VOZ1671 operated by VH-VPJ - landed at Rockhampton.  Both flights eventually returned to Brisbane.
Posted by Damian F at 8:30 PM 0 comments

It arrived from Brisbane late in the morning and departed back to the capital during the afternoon.

It is expected that VH-SGY should be visiting Gladstone on Sunday 31 January as there is a Queensland Government Community Cabinet meeting being held in the port city.
Posted by Damian F at 8:37 PM 0 comments


It's been widely reported that Whitsunday Air Services / Hamilton Island Air Cessna 208FP Caravan VH-WTY experienced difficulties and crashed while landing at Chance Bay on the Eastern side of Whitsunday Island near Hamilton Island on Thursday 28 January.


VH-WTY - which is based at Hamilton Island - was operating what has been described as a "routine" flight with a pilot and 10 passengers on board. Queensland Police media reported that the approach to the Chance Bay was tricky with rough seas, and upon landing, the seaplane bounced before landing heavily, coming to a stop on the beach and colliding with vegetation. The aircraft was destroyed and is expected to be removed by helicopter some time in the next week.


Six occupants were injured while five others were unhurt. A 24-year-old woman was flown out to Mackay Base Hospital by the Central Queensland Rescue Helicopter Service (CQ Rescue) Bell 412EP VH -CQJ ("Rescue 412").
Posted by Damian F at 11:00 AM 0 comments

A surprise and most welcome arrival into Rockhampton Airport late on Friday 29 January was Susi Air (Indonesia) Cessna 208 Caravan PK-VVH. 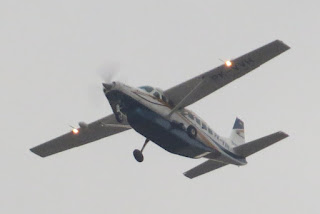 Local plane spotter Kayanne H captured this great photo as the Caravan was on final approach to Rocky's Runway 33 after flying North from Melbourne (Essendon) and Brisbane.

At the time of writing, on Saturday 30 January, PK-VVH has departed Rockhampton for Cairns and Merauke in Indonesia.

UPDATE!  Sincere thanks to local plane spotter 'IAD' who captured this great photo of PK-VVH shortly before it departed Rocky for Cairns. 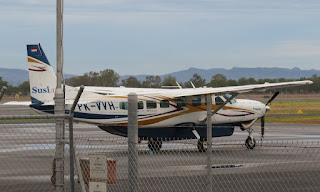 Photos taken by Kayanne Hardsman and 'IAD'  ©
Posted by Damian F at 8:00 AM 0 comments 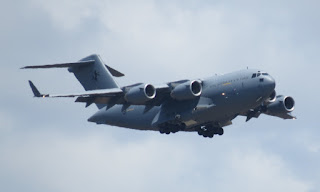 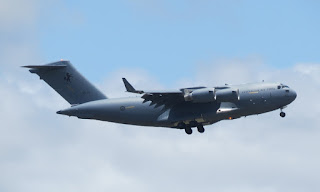 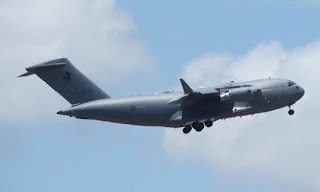 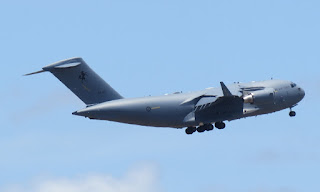 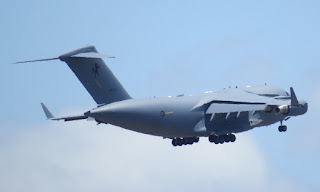 It was later heard to also perform a missed approach at Maryborough Airport before returning to RAAF Base Amberley.

Then a little later on Friday 29 January, RAAF Airbus A330-203 / KC-30A (MRTT) A39-001 made what is possibly its first visit to Rockhampton, flying in from the North and also completing a missed approach on Rockhampton's Runway 33 but as "Dragon 12". 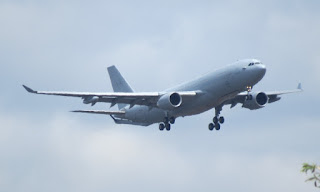 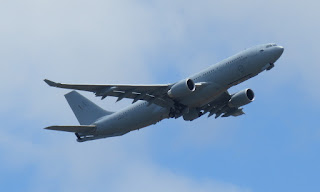 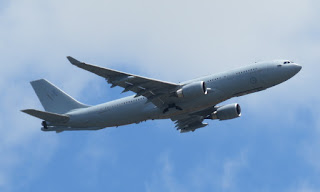 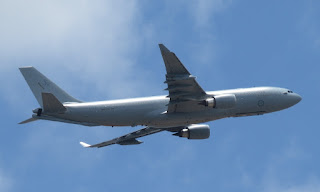 It looked to also then head South back to RAAF Base Amberley.


On Thursday 28 January, A32-671 flying as "Dingo 24" was noted completing airwork around Biloela / Thangool Airport before later landing at Hervey Bay (Fraser Coast) Airport.  It then returned to Townsville.

On Wednesday 27 January, A32-426 also flying as "Dingo 24" was noted arriving into Longreach Airport from Townsville.

And finally on Tuesday 26 January, A32-671 flying as "Dingo 13" was noted departing Mackay Airport for the North.

On Wednesday 27 January, the Queensland Government (State of Queensland) Raytheon B300 Super King Air VH-SGQ was noted visiting Moranbah Airport.  It called in from and later departed back to Brisbane.


Meanwhile, on Monday 25 January, VH-SGQ looked to operate prisoner transfer flights up and down the Queensland coast with it being noted visiting Rockhampton (twice), Proserpine / Whitsunday Coast, Cairns and Maryborough during a busy day of flying from and back to Brisbane.


I believe that VH-VWG may have also called into Blackwater Airport on Thursday 28 January.

Aerorescue (AMSA) Dornier 328 and the Capricorn Helicopter Rescue Service (CHRS) Bell 412 chopper were tasked to a bulk carrier approximately 80 nautical miles off the coast of Gladstone late on Wednesday 27 January where a 47-year-old male crew member was airlifted to Rockhampton with a medical condition.

Kefford Corporation (of Victoria) Gulfstream IV-SP N810LP was noted calling into Longreach Airport on Wednesday 27 January.  It flew in from its Melbourne (Essendon) base.


Of interest, N810LP was recently spotted at Essendon wearing special stickers for an Australian beer promotion - a 'pub crawl' in a plane!


Back at Longreach, N810LP later departed back to Essendon.

Meanwhile, a couple of other visitors to Longreach Airport this week have included Corporate Air / Vee H Aviation Cessna 441 Conquest VH-VED which operated from and back to Brisbane late on Tuesday 26 January.
Air Link Piper PA-31-350 VH-DVR has called into Longreach Airport twice more over the last few days making its way back South from Normanton to Dubbo via Longreach and Charleville on Sunday 23 January.  It had flown North into Normanton on the previous day.


VH-DVR then returned to Longreach direct from Dubbo on Tuesday 26 January.  It later departed further North to Normanton yet again.

Of interest, it appears that fellow Air Link Navajo VH-MZF continues to operate out of Normanton flying regular runs to Mornington Island and back.

Finally, Beech B58P VH-BLT, which is often utilised by Rockhampton-based Peace Aviation, was also noted flying into Longreach on Tuesday 26 January from Rockhampton and Capella.
Posted by Damian F at 8:27 PM 0 comments 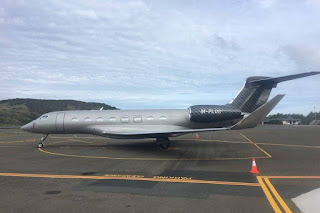 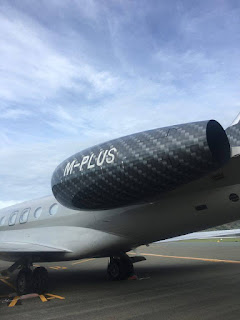 M-PLUS had arrived from Cairns on Sunday 24 January.

Meanwhile, on Tuesday 26 January Cessna 680 Citation Sovereign bizjet VH-VPL called in briefly from its Gold Coast Airport base.  It is becoming a semi-regular visitor having called in the previous week as well!

Thanks to our contributor for capturing and sending through these photos of the sleek Gulfstream.

Noted visiting Gladstone Airport on Monday 25 January was Virgin Australia Boeing B737-800 VH-VUZ. It operated the early morning VOZ1707/1710 scheduled service from and back to Brisbane.


Meanwhile, Virgin Australia operated Embraer E-190 VH-ZPH also into Gladstone Airport on Sunday 24 January when it operated the VOZ1713/1716 service also from and back to Brisbane.
Posted by Damian F at 9:19 PM 0 comments

Embraer EMB-550 Legacy 500 bizjet N142GZ has returned 'home' to Mackay Airport on Monday 25 January.  It flew in from Sydney and Melbourne (Essendon) Airports.


N142GZ had flown out from Mackay and remained at Sydney since Thursday 31 December.
Posted by Damian F at 8:43 PM 0 comments


It departed to Townsville in the wee small hours of Monday 25 January. 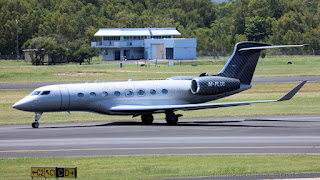 The beautiful looking aircraft touched down from Cairns (where it is pictured above).

M-PLUS had arrived in Cairns from Chengdu Airport in China the previous Monday 18 January.

Meanwhile, also on Monday 18 January and back at Hamilton Island Airport, Cessna 680 Citation Sovereign bizjet VH-VPL called in briefly from its Gold Coast Airport base.

Photo taken by the FNQ Skies Blog  ©
Posted by Damian F at 9:14 AM 0 comments

I believe that it called in from Normanton and a short time later it departed to Archerfield.

Sincere thanks to local plane spotter Michael F for taking the time to capture and allow us to share these great photos of a great visitor!

All photos taken by Michael Fleetwood  ©
Posted by Damian F at 7:43 PM 0 comments

As we reported on our Facebook Page, Heli Niugini MBB BK-117 helicopter P2-HNC arrived at Mackay Airport from Cooktown, Cairns and Townsville late on Friday 22 January.  It then continued further South on Saturday 23 January calling into Rockhampton and Bundaberg Airports before concluding its journey at Redcliffe.

Research reveals that P2-HNC wore the New Zealand registration ZK-IQL and ferried to PNG in January 2014 - possibly via Central Queensland.  Previous to that, it even operated in a med-evac role while being operated in the United States of America (USA) - hence what appears to be the 'medical' themed livery.

Finally, another nice chopper in the form of Nautilus Aviation Bell 407 VH-VHU was heard to depart Gladstone for Mackay early on Friday 22 January.  It departed further North from Mackay to Townsville and has since been noted operating out of Cairns.

All photos taken by Kayanne Hardsman  ©
Posted by Damian F at 7:35 PM 0 comments

A few interesting movements at Longreach Airport over the previous couple of days including visits by a nice pair of local bizjets.


The Queensland Government (State of Queensland) Raytheon Hawker 850XP bizjet VH-SGY touched down at Longreach Airport from Brisbane and Roma on Thursday 21 January.  After spending the night, VH-SGY departed Longreach to Windorah before returning to Brisbane.

Another bizjet to visit Longreach Airport on Friday 22 January was Edwards Coaches Cessna 525 Citation CJ1 VH-KXL which made a late night arrival from Armidale and the Gold Coast.  It later departed to Mount Isa where it landed in the wee small hours of Saturday 23 January.

Then, later on Saturday 23 January, VH-KXL returned to Longreach Airport from Mount Isa and later departed to Brisbane and Armidale.


It later departed to Townsville.
Posted by Damian F at 7:53 AM 1 comments

Making its second appearance this week in the skies over Rockhampton on Friday 22 January was Royal Australian Air Force (RAAF) Boeing C-17A Globemaster III A41-212. 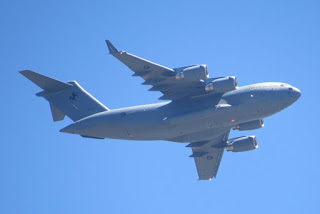 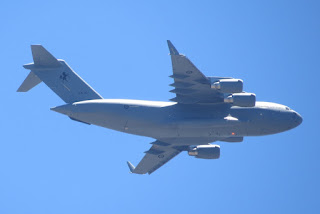 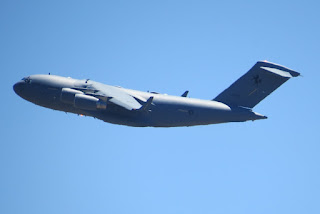 On this occasion A41-212 was flying as "Stallion 32" and appeared to fly up from RAAF Base Amberley and then continue further North to Townsville.

Thanks to local plane spotter Travis W for capturing and sending through these great photos!

All photos taken by Travis Whiting  ©
Posted by Damian F at 7:43 PM 0 comments

On Wednesday 20 January, Toowoomba-based Vanderfield Pilatus PC-12/47 VH-WPH made yet another visit to Central Queensland, calling into both Biloela/Thangool and Mackay Airports from Toowoomba during a busy day of flying. 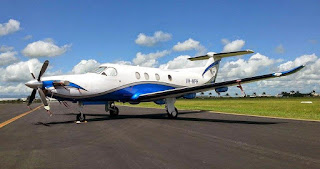 This photo is one of many that were captured early last year when VH-WPH also visited Mackay Airport.  Click HERE to check out the rest as we were able to 'walk-around' the smart little corporate turbo-prop. 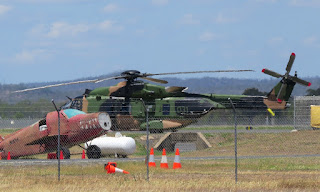 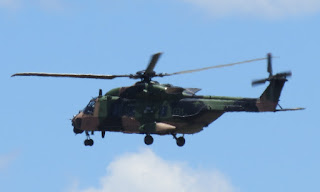