Over the course of the weekend, Heli Niugini Bell 407 helicopter P2-HBW looked to complete a ferry flight South from Papua New Guinea (PNG). 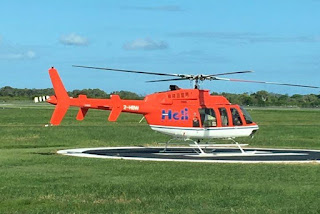 Late in the afternoon on Saturday 28 January, it was photographed (above) shortly after arriving at Mackay Airport from Townsville.  It was earlier noted departing Cooktown for Cairns and then Townsville.

It is believed that P2-HBW continued to further points to the South of Bundy.