Amid a few departures of various airliners from Australian skies, the second Embraer ERJ-140LR (ERJ-135KL) regional jet for JetGo Australia arrived in Australia last week on completion of a week-long delivery flight from the United States of America (USA) via Canada, Alaska, Russia, Japan and The Philippines.  The ERJ-140LR still wears its American registration marking of N295SK which it operated for Republic Airways Holdings, which provides regional services to the major network carriers in the USA.  It has been repainted into JetGo Australia livery and will ultimately wear Australian registration VH-ZJE when it enters service. 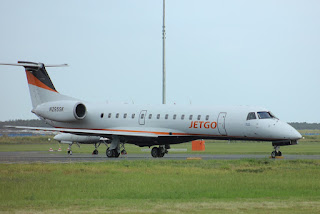 N295SK was noted arriving in Australia at Horn Island in Far North Queensland from Francisco Bangoy International Airport / Davao International Airport in the Philippines on Wednesday 18 January.  It continued to Brisbane Airport where it arrived after dark.  It was spotted resting on General Aviation (GA) Apron at Brisbane Airport early on Thursday 19 January, alongside now sistership and fellow ERJ-140LR (ERJ-135KL) VH-ZJG (ex N297SK) which was delivered JetGo in October - see Blog post HERE. 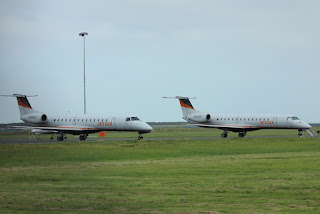 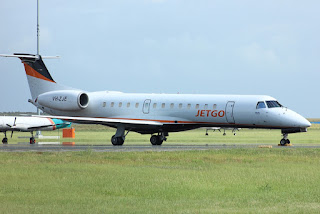 During the delivery flight N295SK was noted using the flight number and callsign of JG99 ("JetGo 99").


JetGo is also reportedly due to take delivery of a larger 50-seat Embraer ERJ-145LR during the middle part of this year.  It is reported to be N577RP which is also operated for Republic Airways Holdings.