Interesting to note that the final visit to Moranbah Airport by the recently withdrawn Virgin Australia ATR 72-500 VH-FVM on Sunday 10 September as VOZ1669/1670 from and back to Brisbane was, it seems, to be the FINAL ever Virgin Australia flight into the Central Queensland mining town. 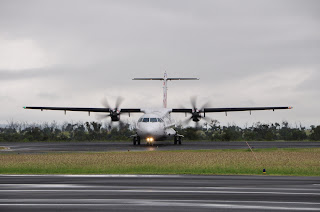 Since Sunday, there has been NO further Virgin Australia flights in or out of Moranbah Airport.

In an email from Virgin Australia, they advise that "(they) are no longer able to offer flights to and from Brisbane and Moranbah after Sunday 10 September. Virgin Australia's decision to cease operations on the Brisbane to Moranbah route (vice versa) is part of an initiative to optimise (their) fleet and network".

As previously mentioned, Virgin Australia announced in 2016 that it planned to consolidate its turboprop operations to routes only within the ACT, New South Wales and Victoria and consequently would reduce the number of ATRs in the fleet from 14 to six.  As a result, the airline would end ATR 72 turboprop operations in Queensland which has now happened with this final flight to and from Moranbah Airport.

Meanwhile, it was excepted that in July, Alliance Airlines Fokker jet aircraft would take over Virgin Australia flights into Moranbah Airport and operate as many as 13 flights per week from and back to Brisbane.  While flights took off from Gladstone, Bundaberg and Port Macquarie there hasn't been an Alliance Airline flight touch down in Moranbah Airport yet.

At the time, Alliance Airlines chief executive officer Lee Schofield still hoped his planes would be granted access to Moranbah Airport.  Despite the local Isaac Regional Council (IRC) being very supportive, the approval process wasn't as simple as the operator BHP Mitsubishi Alliance (BMA) allowing Alliance Airlines to use the airport. 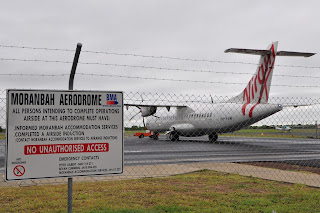 The airport runway is designed for turbo-prop operations, which has been the aircraft used on the current flights but Alliance Airlines would use a jet aircraft.  To allow the service, BMA would have to apply for another development application through Isaac Regional Council asking to make more noise as a result of a jet plane and possibly increase the airport infrastructure to allow for the planes to land on the runway.

Clearly, this has not happened.

In a statement from Alliance Airlines, they "do not currently have any scheduled flights to Moranbah and is still evaluating the possibility of flying there in the future".
Posted by Damian F at 8:43 AM