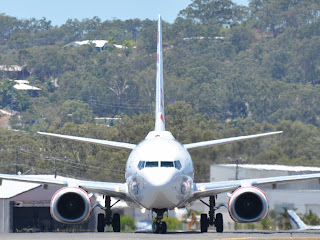 Spotted making a surprise but most welcome arrival into Gladstone Airport on Sunday 3 November was Virgin Australia Boeing B737-700 VH-VBY.

Local plane spotter Michael F was on hand as VH-VBY - named "Kingston Beach" - touched down from Brisbane late morning as VOZ1711.  It later departed back to Brisbane as VOZ1714.

While he was there, Michael also captured QantasLink Dash-8-Q300 VH-SBV as it departed Gladstone on the final leg of the QLK2301 flight from Cairns to Brisbane via Townsville, Mackay, Rockhampton and Gladstone.

On the lighter side, he also spotted an amateur built Thorp T-18 registered VH-WKV as it arrived at Gladstone Airport.

Thanks to Michael for sending through these great images from a nice day's plane spotting at Gladstone Airport!

All photos taken by Michael Fleetwood  ©
Posted by Damian F at 6:56 AM