A link between Proserpine / Whitsunday Coast Airport and Melbourne has been established as the first Jetstar Airways flight from Melbourne (Tullamarine) Airport touched down at Prosie on Thursday 25 June. 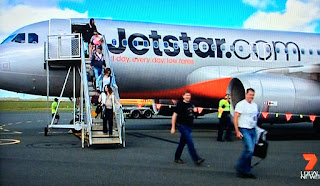 Airbus A320 VH-VGA had the honours as the first JST832 service touched down just after 10.30am.  After cake cutting and media commitments, VH-VGA returned to Tullamarine as JST831. 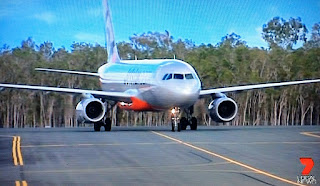 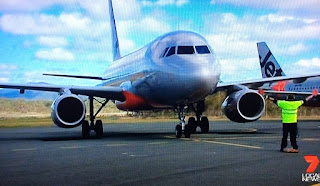 The new Jetstar service will bring three return flights to the Whitsunday Coast Airport from the Victorian capital every Monday, Thursday and Saturday.

Meanwhile, Qantas will introduce a twice-weekly return service between Melbourne (Tullamarine) and Hamilton Island Airport, operated by Boeing B737-800 aircraft, from Saturday 27 June.  This takes-over the the route from Jetstar Airways.
Posted by Damian F at 10:32 PM