A Few Plane Spotting Photos and Movements at Mackay Airport

A few lovely photos have come my way of a couple of nice aircraft to call into Mackay Airport over the last few days. 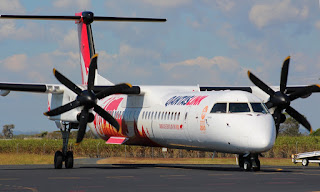 It was also spotted in the days prior operating the new Dash-8-Q400 shuttle between Cairns, Townsville and Mackay.

Also on Sunday 9 August, Jetstar's brightly coloured Airbus A320 VH-VGF called into Mackay while operating the morning scheduled JST882/883 service from and back to Brisbane.

VH-VGF wears a special orange colour scheme (or jaffa as has been described on other forums) celebrating Jetstar's 10 years of service in 2014.  As shown, the starboard side of the fuselage features text saying 'Low fares forever', while the port side has the phrase '#jetstargeneration' to signify the generation of travellers who have taken advantage of the low fares Jetstar has brought to the Australian market.

Finally, Skytrans Airlines Dash-8-100 VH-QQG also called into Mackay operating what looked to be a charter for a sports team for the second week straight.

It arrived into Mackay from Cairns on Saturday 8 August as SKP202.  It later departed to Townsville and then Cairns as SKP203.