Late on Thursday 17 September, JetGo Australia Embraer E-135LR jet VH-JZG touched down at Rockhampton Airport from Townsville and Cairns.  It was noted to be operating a charter for the National Basketball League (NBL) with the Townsville Crocodiles and Cairns Taipans basketball teams playing a trial match in the beef capital over the weekend. 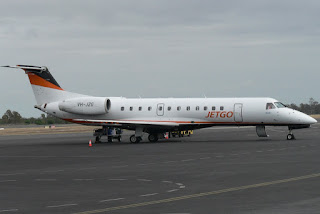 Then, in the wee small hours of Friday 18 September, VH-JZG returned to Townsville where it then operated one of its usual Fly-in Fly-out (FIFO) flights to Osborne Mine. 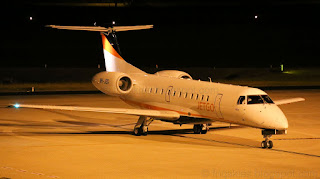 Then early on Saturday 19 September, VH-JZG was captured as it returned to Rockhampton Airport from Townsville. 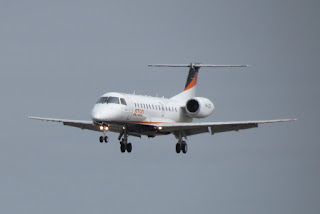 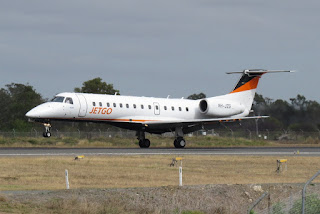 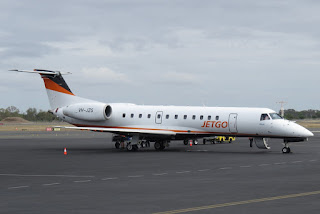 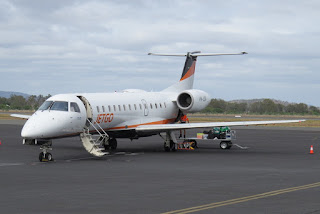 It collected passengers and cargo and departed to Cairns and Townsville.

Media reports suggested that the much publicised visit of VH-JZG on Thursday night was the 'first visit' by a JetGo aircraft.  This is most definitely not the case with the first two aircraft delivered to the airline actually passing through Rockhampton while on their delivery flights in 2012 - and since then JetGo E-135s have been fairly regular visitors on various sports and other charter flights!

We are also looking forward to 'taking the jet' on Monday 28 September when we board the inaugural JetGo flight from Townsville to the Gold Coast via Rockhampton.  Come out and join in the fun!

Photos taken by the FNQ Skies Blog, 'IAD' and Don Williams  ©
Posted by Damian F at 8:36 AM