Last weekend, Pitts Special S-2A VH-PDU, which wowwed the crowd at the recent Whitsunday Airshow at Airlie Beach, crashed while performing an aerobatics display at Barraba, near Tamworth in New South Wales. 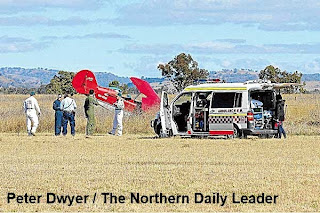 Miraculously, the pilot, Phil Unicomb, suffered only abrasions, bruising and an injured back, after the bi-plane reportedly dropped out of the sky and hit the ground hard.

Phil has been flying for 30 years and runs Action Aerobatics. He had been the star attraction at the inaugural Barraba Action Aerobatics Display. Pictured below is Phil preparing to take VH-PDU for a fly at Airlie Beach last month. 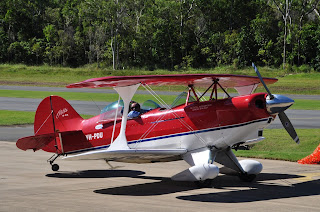 An ambulance was on scene when the accident occurred, and Barraba police also attended. Phil was been taken to Barraba Hospital before being transferred to Tamworth Hospital in a stable condition.

The incident has also been reported to the Australian Transport and Safety Bureau and Civil Aviation Authority.
Posted by Damian F at 11:38 AM