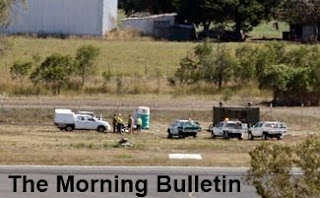 AAP - An Australian Defence Force (ADF) member has suffered horrific burns in a portaloo explosion on Monday 25 July as Rockhampton. The incident was apparently sparked by a cigarette.

The man suffered third-degree burns to his head, face, arms, chest and airways in the incident.

He was taken to the Rockhampton hospital in a serious condition, and was expected to be evactuated to Brisbane Monday night.

The man was participating in Military Exercise Talisman Sabre, the joint US-Australia exercise, which is currently being held in Central Queensland, and is using Rockhampton Airport.

The man's family has been notified, and police and fire authorities were investigating the incident.
Posted by Damian F at 11:00 PM