Photo from Adam P in Mackay. 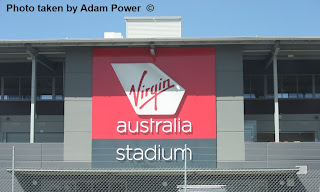 The stadium will now be known as Virgin Australia Stadium Mackay, a name which will be used to lure state, national and international sporting and entertainment events to the precinct.

“It's big – it's the cream on the cake,” he said. “It gives us another level of credibility.”

Virgin Australia Stadium Mackay operations manager Clinton Begg said the sponsorship deal would help the stadium committee attract state and national sporting events, such as the NRL and A-League, to the stadium.

“The naming rights hold quite a significant amount of weight at corporate level,” he said.

“From a national level this puts Mackay in a different spot than Rockhampton or Townsville.”

Virgin signage has already been installed at the stadium at ground level, while there will also be an illuminated 7m by 7m Virgin Australia sign erected at the venue.

“We hope that Virgin Australia Stadium Mackay will host many national and international sporting and entertainment events, boosting the Mackay local tourism, hospitality and business sectors,” she said.

Mr Begg said it was always the intention of the stadium committee to secure a big name as naming rights sponsor and Virgin was quickly identified as a potential suitor.

“Our intention was always to get a multi-national branding on the stadium,” he said. “We knew they (Virgin) were doing (their own) re-branding and they're a reputable business and they're expanding into Mackay as well.”

Virgin representatives will be among the officials at Virgin Australia Stadium Mackay tomorrow night for the venue's official opening when the STM Mackay Cutters take on Easts Tigers.

Mr Sutherland said he was the first to get his tickets from the MECC for the game and was hopeful it would attract a sell-out crowd of 6000. Gates open at 12.30pm with the official stadium opening starting at 5.20pm. The game between the Cutters and Tigers kicks off at 6.30pm.