Also on Saturday 25 November, a pair of Royal Australian Air Force (RAAF) Pilatus PC-9/A training aircraft were spotted on the ground at Mackay Airport.  They were identified as A23-031 and A23-020. 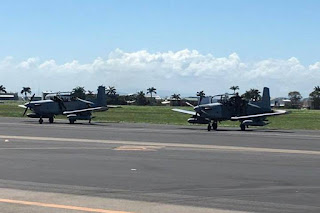 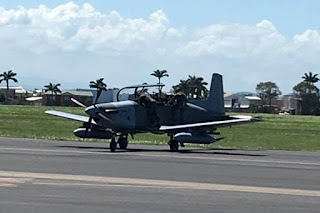 After taking on fuel, they continued further North to depart Townsville where it is believed that they will participate in the RAAF's Exercise High Sierra - the final training exercise for pilots graduating from Number 2 Operational Conversion Unit. (No. 2OCU) Squadron which operates out of RAAF Base Williamtown.

The two PC-9s are both flown by the RAAFs 4 Squadron (Forward Air Control) based at RAAF Base Williamtown.  Number 4 Squadron consists of three flights, with 'A Flight' comprising the aircrew responsible for operating the four Pilatus PC-9/A Forward Air Control (FAC) variant aircraft.

They were heard to be using the radio callsign of “Reaper” as they flew North from Mackay Airport.