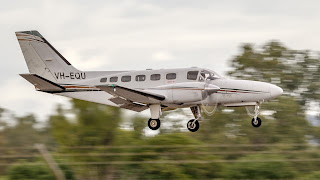 It looked to fly up from Redcliffe and Archerfield to Hervey Bay (Fraser Coast) and then Mackay Airports before finishing at Cairns.
UPDATE!  On Wednesday 28 April, VH-EQU flew down from Cairns to Innisfail, Townsville, Rockhampton (pictured) and Gladstone Airports.
UPDATE!  On Thursday 29 April, VH-EQU flew from Gladstone Airport to Bundaberg, Maryborough, Lismore and Grafton Airports.
Brescon (Toowoomba) Beech B200 King Air VH-XDW flew up from Toowoomba-Wellcamp to Chinchilla, Yellow Bank and Rolleston Airports.  It later returned to Wellcamp via Chinchilla Airport.

Seair Pacific / Istlecote Cessna 208 Caravan VH-TQW flew up from Hervey Bay (Fraser Coast) and Maryborough Airports to Wanella Station (near Coppabella) before flying back down to Hervey Bay Airport.
Meanwhile, also on Tuesday 27 April, there were more light General Aviation aircraft and helicopters continuing to come and go from CQ Airports after spending the weekend up in the Whitsundays.

NSW based Alpha Aviation Piper PA-32R-301 Cherokees VH-KTN and VH-OAZ both arrived into Rockhampton Airport from Proserpine (Whitsunday Coast) Airport.  On touchdown though, VH-KTN had landing gear issues and ran off the main Runway 15/33.  The runway was closed for a little while. There was no major damage to the aircraft and it ended up continuing to the Sunshine Coast later in the day.
VH-OAZ also departed Rocky for the Sunny Coast.
Schofield Flying Club (NSW) Piper PA-28-181 Cherokee VH-SFA departed Rockhampton Airport for Roma Airport.
J & J Aviation (Victoria) Piper PA-28-181 VH-TXD flew down from Hamilton Island Airport to Hervey Bay (Fraser Coast) Airport.
Macair Aviation (New South Wales) Robinson R44 VH-VVY flew from Mackay Airport to Rockhampton and then Bundaberg Airports.

Touchdown Helicopters Robinson R44 VH-YZD arrived from the North then departed to the South.

Finally, also on Tuesday 27 April, the Queensland Police Service (Airwing) (State of Queensland) Raytheon B1900D VH-PSK called into Maryborough and Rockhampton Airports while flying up from Brisbane to Townsville and then Cairns.  It had flown down to Brisbane from Cairns via Townsville earlier in the day. 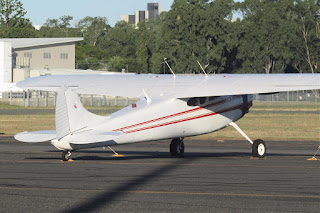 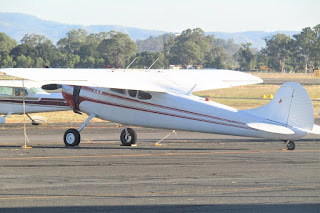 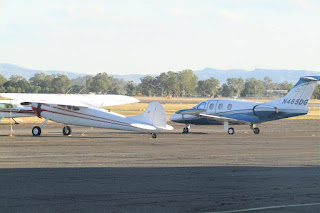 VH-ONV had arrived at the end of last week after being unable to land up at the Whitsundays (its intended destination) due to weather.
Photos taken by Steve Vit and Trevor Hardsman  ©
Posted by Damian F at 11:20 PM