Disappointing to see that on Thursday 1 December, the two Royal Australian Air Force (RAAF) Pilatus PC-21 Forward Air Control Aircraft A54-048 and A54-049 both departed Rockhampton Airport for RAAF Base Williamtown.  They arrived from there on Monday 28 November, presumably to support the RAAF's Exercise Rogue Ambush 2022, but they remained parked on the Rockhampton Airport General Aviation (GA) parking apron (pictured), presumably unable to fly due to the inclement weather in the area. 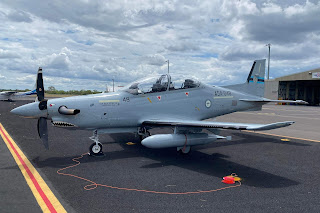 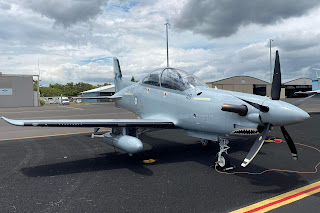 Of interest, A54-048 departed at "Mayhem 11" while A54-049 departed as "Mayhem 12".
The good news is though (hopefully) they will return next week as the RAAF's Exercise Rogue Ambush starts to wrap up.
Meanwhile, also departing Rockhampton Airport, also on Thursday 1 December, was Air Affairs (Australia) LearJet 35A bizjet VH-LJU which headed back to HMAS Albatross at Nowra as "Lyrebird 66".
UPDATE!  As mentioned above, on Friday 2 December, fellow Air Affairs LearJet 35A VH-VLJ also departed Rockhampton Airport, also for Nowra but as "Lyrebird 32".
Over the course of Thursday 1 December and Wednesday 30 November, there was no other flying out of Rockhampton Airport in support of Exercise Rogue Ambush 2022 with inclement weather hampering local flying.

On Wednesday, heard up in the Shoalwater Bay Training Area (SWBTA) during the morning and again in the afternoon were three flights of RAAF Lockheed Martin F-35A Lightning II fighter aircraft as "Hunter", "Hawkeye" and "Hipshot", which all completed sorties out of and back to RAAF Base Amberley.
RAAF Boeing EA-18G Growler electronic warfare jets as "Savage" also joined the F-35A's and appeared to fly with "Hunter".
RAAF Airbus A330-200 / KC-30A Multi Role Tanker Transport (MRTT) A39-001 as "Dragon 14" was also noted in the area providing air-to-air refuelling support to the jets.
RAAF Boeing B737-7ES / E-7A Wedgetail Airborne Early Warning & Control (AEW&C) aircraft A30-003 as "Mitchel 03" flew up from RAAF Base Williamtown to the Exercise area and on completion landed at RAAF Base Amberley.  It later returned to Williamtown.
Finally, late on Thursday 1 December, a pair of Royal Australian Air Force (RAAF) Alenia C-27J Spartan transport aircraft were noted completing airwork around Charters Towers Aerodrome while on flights out of and back to Townsville.  They were identified as A34-001 "Kaos 76" and A34-006 "Kaos 77".
All photos taken by Liam Richardson  ©
Posted by Damian F at 8:50 PM