On Thursday 30 March, Australian Army and QGAir Rescue helicopters have continued their relief efforts in parts of CQ in the wake of Tropical Cyclone Debbie. 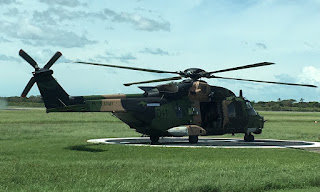 Australian Army MRH-90s have been joined by Boeing CH-47F 'Foxtrot' Chinook helicopters which are providing airlift capabilities to affected regions like Bowen and Proserpine.  They are also believed to be providing passenger transfer capabilities as the evacuation of stranded guests from several Whitsunday Island resorts commenced on Thursday 30 March.


Queensland Government (QGAir) Rescue helicopters continue to operate in the region providing mostly medical evacuation services, but also in one instance, evacuating as many as seven stranded residents from the small town of North Eton near Mackay.  QGAir Rescue Agusta AW139 helicopter VH-ESZ "Rescue 500" and QGAir Rescue Bell 412 helicopter VH-ESD "Rescue 521" both looked to be based at Mackay Airport on Thursday 30 March and were spotted on the western General Aviation (GA) apron. 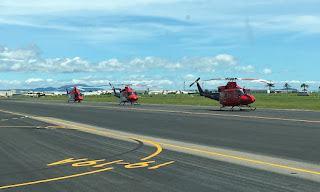 Of interest, VH-ESZ was later noted returning South from Mackay to Rockhampton and then Gladstone Airports where it parked for the night.

Meanwhile several civilian helicopters continue to be noted operating in the disaster area - on a mix of airlift and survey flights.  As the photo below shows, Emerald-based Calibre Aviation has welcomed part of the Helitours North Queensland fleet from Cairns with one of their Bell 206 Jetrangers seen completing a survey flight of power line infrastructure for Ergon Energy around Clermont and Emerald.


Back at Mackay Airport, on Thursday 30 March, the pair McDermott Aviation / Heli-Lift Australia AS365N2 Dauphin helicopters - Aerospatiale SA365N1 Dauphin 2 N38MD 'Helitack 429' and Aerospatiale AS-365N-2 Dauphin 2 N365JL 'Helitack 475' - were also spotted on the Western GA Apron.  They seem to be based out of Mackay Airport assisting with the relief effort in the local area. 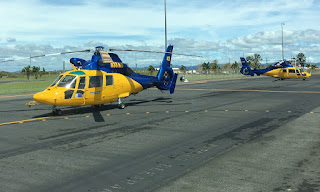 Finally, also on Thursday 30 March, a pair of Becker Helicopters helicopters were heard completing powerline inspections around parts of CQ. 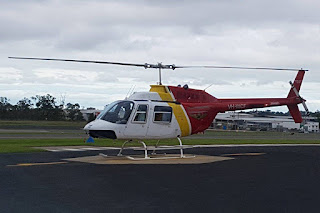 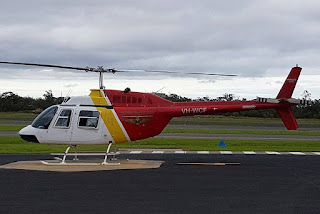 Bell 206 Jetranger VH-WCF was photographed at Gladstone Airport (above) after it returned from airwork in the area, while Aerospatiale AS.350D Squirrel VH-PIH was heard to depart Rockhampton Airport for airwork around the Moranbah area.