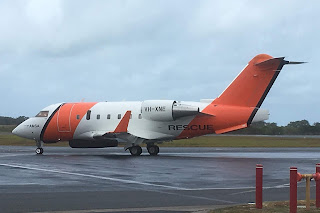 It looked to call into Mackay Airport at the completion of a flight from Cairns which lasted just over three hours and took the Challenger over Palm Island and then to a position inland from Mackay.  VH-XNE appeared to be using its registration as its radio callsign rather than the usual "Rescue" callsign.

After almost an hour on the ground, VH-XNE returned directly to Cairns.