After around a month tucked up in the hangar, on Monday 30 September, the Queensland Police Service (Airwing) (State of Queensland) Cessna 560 Citation Ultra bizjet VH-PSU was back in the air and back in Central Queensland.  It was photographed at Charleville Airport soon after it arrived from Brisbane and Roma Airport. 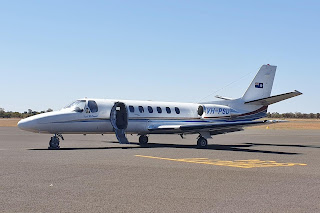 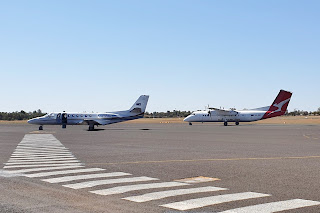 After some time on the ground, VH-PSU then continued to Longreach Airport where it spent the night.

Then on Tuesday 1 October, VH-PSU continued from Longreach Airport to Emerald Airport and then Mackay Airport.

At the time of writing, VH-PSU appears to be staying for the night in the sugar city.

UPDATE!  On Wednesday 2 October, VH-PSU departed Mackay Airport for Rockhampton Airport and Gladstone Airport.  It then returned to Brisbane.

All photos taken by Zac Fitzgerald  ©️
Posted by Damian F at 9:19 PM