On Wednesday 9 October, the Queensland Government Airwing (State of Queensland) Raytheon Hawker 850XP bizjet VH-SGY was spotted on the ground at Bundaberg Airport.  It had earlier arrived from Brisbane. 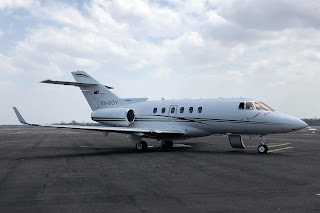 During the middle part of the afternoon, VH-SGY departed Bundaberg Airport and returned to Brisbane.

And almost missed by us, but on Tuesday 8 October, VH-SGY visited Roma Airport.  It also arrived from and later departed back to Brisbane.

Meanwhile, over the course of this week, the Avcair (Earth Commodities) Cessna 550 Citation Bravo bizjet VH-CCJ has again been noted operating out of Bundaberg Airport.