As mentioned below, on Wednesday 5 February, Finico (Avcair) Embraer EMB-505 Phenom 300E bizjet VH-NSQ arrived into Gladstone Airport from from Melbourne (Essendon) via the Ballina / Byron Bay Gateway Airport.  It was photographed below resting on the upper parking apron at Gladstone Airport on Thursday 6 February. 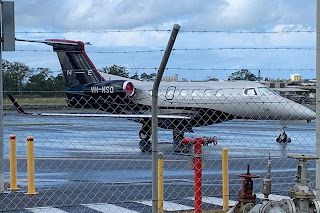 Then on Friday 7 February, VH-NSQ departed Gladstone Airport and was noted returning to Ballina and then to Essendon.

Local media reports that Australian actor Chris Hemsworth (or 'Thor') was possibly on board as he was spotted around the town.