On Monday 17 February, the latest Alliance Airlines Fokker F-70 jet to enter service - registered VH-NUZ - looked to operate its first 'commercial' flight for the airline when it completed the weekly UTY4078/4079 Fly-in Fly-out (FIFO) charter flight into Emerald Airport from and back to Brisbane via the Sunshine Coast.  It was photographed below soon after arriving into Emerald Airport. 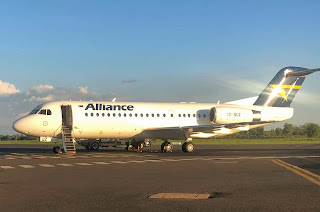 UPDATE!  VH-NUZ returned to Emerald Airport again early on Tuesday 18 February when it completed the UTY4072/4073 FIFO charter flight again from and back to Brisbane via the Sunshine Coast.

Of interest, the F-70 VH-NUZ was originally delivered to Alliance Airlines in Brisbane at the end of March in 2018.  It also wore the registration marking of OE-LFQ and was still in a basic livery of its previous operator, Austrian Airlines (Austrian Arrows).


VH-NUZ entered the Australian Aircraft Register in April 2018 with Alliance Airlines and then looked to sit without its engines at Brisbane Airport for some time.  It was reported that the aircraft would not enter service with the airline and was acquired as a source for spare parts.


It came as a surprise when VH-NUZ was noted arriving into Melbourne (Avalon) Airport in mid-January (as shown above) where it was re-painted into the Alliance Airlines livery.