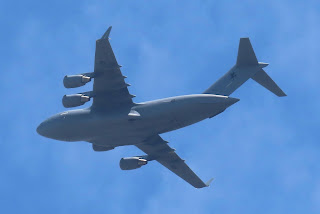 The C-17 initially departed RAAF Base Amberley and flew West to complete airwork overhead Charleville Airport before heading North and completing missed approaches at both Emerald and Mackay Airports.  A41-211 was then spotted (above) climbing out at Rockhampton Airport after completing another missed approach.  It then returned to Amberley.