Spotted at Emerald Airport late on Wednesday 19 February was the familiar sight of American registered Bombardier BD-700-1A10 Global 6000 bizjet N60XC.  The semi-regular visitor to Emerald Airport (and the CQ region) is making its first visit for 2020 and this time looked to arrive from Brisbane. 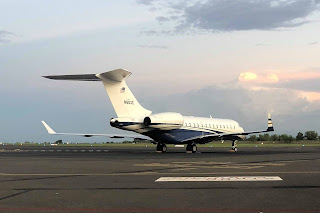 It appears that N60XC arrived into the Queensland capital from overseas via Perth in Western Australia on Sunday 16 February.

At the time of writing, N60XC remains parked at Emerald Airport.

Meanwhile, also noted visiting Emerald Airport but on Monday 17 February was Royal Australian Air Force (RAAF) Beech B350 Super King Air A32-675.  It arrived from RAAF Base East Sale in Victoria and later departed to Townsville.  A32-675 was heard to be flying as "Hudson 02".
Posted by Damian F at 8:22 PM