It initially arrived into Rockhampton Airport from Brisbane before then heading West and landing at Emerald Airport for some time. 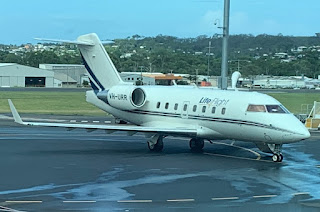 VH-URR "Ambulance 604" then flew back to Gladstone Airport where it was spotted (above) taking on fuel before it then returned to Brisbane.

As posted below, VH-URR "Ambulance 604" also visited Roma and Mackay Airports earlier in the week.